Well, what do we have here? It seems AMD is getting close to refreshing its line of professional graphics cards, and a couple of pictures of an upcoming card design have surfaced on the web. On the outside, they show a slightly different design to the cooling shroud that will be featured on AMD's next Radeon Pro graphics card, albeit with the same color scheme as the Radeon Pro VII (Vega 20).

Once again, AMD is opting for a blower-style cooler, unless something changes between now and whenever the next-gen workstation part actually arrives. The design is only a little bit different, with the new part sporting a thicker gray stripe running down the middle, with an angled indentation into and around the card's single cooling fan.
We don't get a look at the port selection, but the pictures, which were posted to Chiphell and then later removed, do show the front and back of the RDNA 2 card. 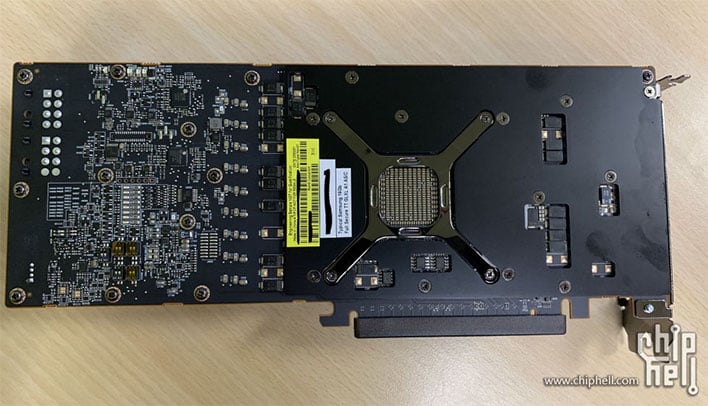 Beyond the slightly altered design, one of the stickers visible on the backside of the card reads, "Full Secure TT GLXL A1 ASIC," suggesting it is based on Big Navi (and specifically, a Navi GLXL GPU). Unfortunately, there are no other revealing details about the GPU, such as how many stream processors it has or what clock speeds it is configured to run.
The card is said to feature 16GB of Samsung memory chips, with a 256-bit memory bus and 128MB of Infinity Cache.
As shown in the shot of the rear, the overall PCB layout is similar to AMD's Radeon RX 6000 series, though not identical. The capacitors look the same, but the power connectors are in a different spot. Speaking of which, the card will draw power by way of two 8-pin PCIe connectors.
This is undoubtedly an engineering sample, and likely based on one of AMD's existing RDNA 2 cards, those being the Radeon RX 6900 XT, Radeon RX 6800 XT, and Radeon RX 6700 XT. Stay tuned, as a formal launch is probably not that far in the distance.