AMD is going all-in with chip stacking technologies, like the stacked 3D V-cache that is headed to its refreshed Zen 3 processors for a claimed 15 percent performance boost, and also its 3rd Gen EPYC processors with an even bigger performance uplift. But what about on the GPU side? A patent application may shed some light on AMD's future plans. 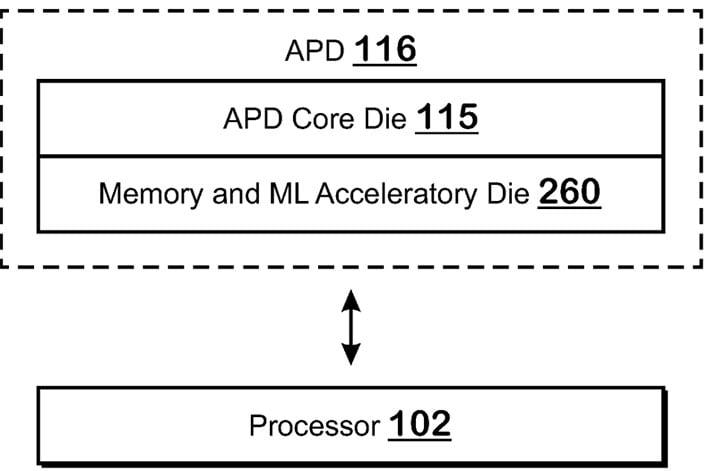 In a patent filed a year ago that was published just a few days ago, AMD outlines an additional die stacked on top of the GPU, separate from the existing chiplet structure. AMD calls this extra die an accelerated processing device (APD) and pitches it as a way to enhance machine learning capabilities. It would contain memory and one or more ML accelerators.
By stacking the additional die, there is an inherent performance advantage that comes by way of high-speed interconnects to transfer data and commands. AMD notes the memory portion could be configurable as either or both a cache and as directly accessible memory. It also says it could contain matrix multiplication arithmetic logic units (ALUs) configured to perform matrix multiplication operations to boost ML chores. 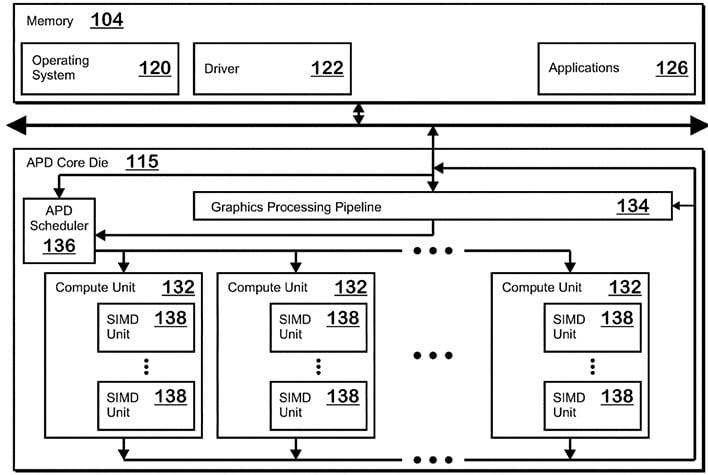 You can see the general makeup in the patent sketch above. It's important to note that a patent application is not a foregone conclusion of upcoming technology in actual products. And if if this does come to fruition, it's not clear if it would be bound for high-performance computing (HPC) like its dual-die Instinct MI200 or future gaming products, or both. But we're certainly intrigued at the prospect.
There's already been chatter for AMD bringing stacked 3D V-cache to its gaming GPUs, and adding another stacked die to the mix is certainly within the realm of possibility. An APD die could serve some of the same purposes as NVIDIA's Tensor cores.
It might be too late to expect this to be part of RDNA 3, but perhaps RDNA 4 is fair game. That's of course assuming AMD turns its patent into an actual product. In the meantime, you can check out AMD's full patent for more details.