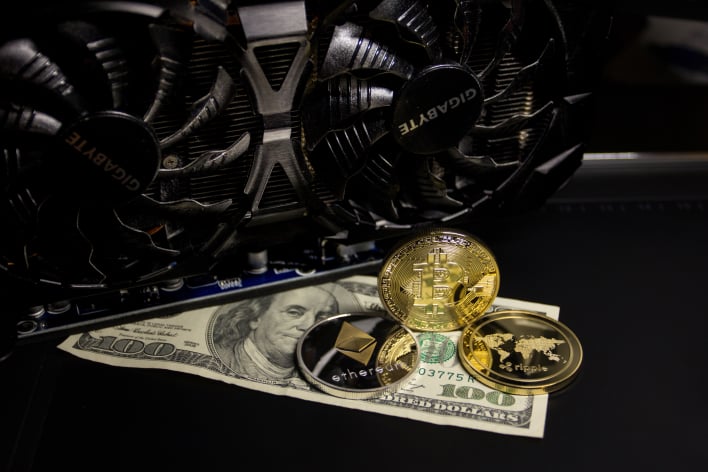 Blockchain is back, and cryptocurrency is coming up again. Earlier this week, PayPal announced that it would accept cryptocurrency payments, which gave Bitcoin a bump in price. With AMD Radeon RX 6000 "Big Navi" cards coming soon, there could be a new rush to mine cryptocurrency.  The fine folks at Phoronix, however, have discovered something called “navi10 blockchain SKU” in the AMD Linux drivers hinting at older hardware purpose-built for mining.

When Bitcoin and Ethereum peaked several years ago, it lead to a mass frenzy of graphics cards for mining. At that time, GPU manufacturers started to produce display-less GPUs for cryptocurrency mining. These GPUs would, in theory, help keep regular GPUs in stock while performing better for the miners. With this new “navi10 blockchain SKU” that Phoronix discovered, perhaps AMD is making a bet on cryptocurrency.

The only difference spotted between the “navi10 blockchain SKU” and regular SKUs is that the “patches disable the Display Core Next (DCN) and Video Core Next (VCN) support with this new SKU not having any display support.” It is expected that the patches will not to be released until Linux 5.11 unless the AMD developers push it through. If it were not to release until Linux 5.11, this would put the card at a possible release in early 2021.  This could mean AMD is making a bet on a cryptocurrency resurgence, or it could be trying to get rid of excess Navi 10 chips, so the new "Big Navi" cards are not taken for mining.

2021 is only a few months away, so hopefully, AMD will mention something soon. The AMD Radeon RX 6000 “Big Navi” lineup will be coming out on October 28th, so between then and 2021, there is not much slated. Perhaps the “navi10 blockchain SKU” is just a ruse; but if AMD is worried about “Big Navi” going to Bitcoin mining, making Navi 10 cards for mining makes sense. We will have to see what happens in the coming weeks or months, but maybe the 2017 crypto-craziness will make a return.