If AMD is in the rear view mirror (arguable), that's only because it keeps making pit stops to collect more money from skyrocketing Zen 3 and RDNA 2 sales. So says the company's latest earnings report. AMD capped off a record year with $4.8 billion in revenue during the fourth quarter, which pushed its full-year earnings to $16.4 billion.
AMD has never performed better on a full-year basis. Back in the day (well before Zen), I remember writing about repeated losses and wondering how long AMD could realistically stay afloat. What a distant memory that has become. The ATI acquisition 100 years ago (thereabouts) allowed AMD to tread water, and under the leadership of Dr. Lisa Su, the company has found a rhythm and is thriving in the silicon sea.
"2021 was an outstanding year for AMD with record annual revenue and profitability," Dr. Su said in a statement. "Each of our businesses performed extremely well, with data center revenue doubling year-over-year driven by growing adoption of AMD EPYC processors across cloud and enterprise customers. We expect another year of significant growth in 2022 as we ramp our current portfolio and launch our next generation of PC, gaming and data center products." 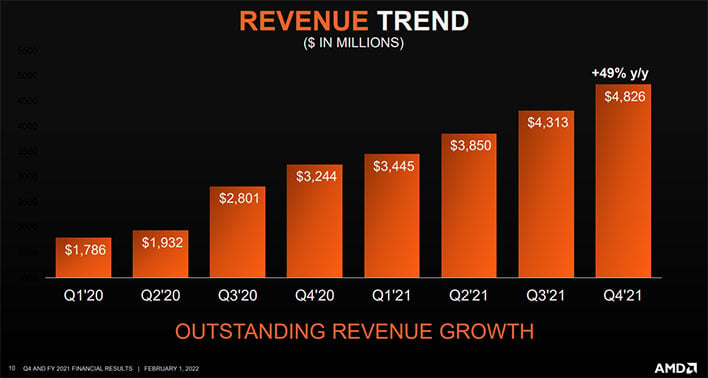 Indeed, AMD's combined Enterprise, Embedded, and Semi-Custom segment tallied $2.2 billion in the fourth quarter for a massive 75 percent year-over-year gain, and a 17 percent jump sequentially. This was driven primarily by an uptick in EPYC and semi-custom processor sales, and contributed to a massive 49 percent year-over-year rise in quarterly earnings.

The Computing and Graphics segment is still AMD's bread and butter, though, and in that division AMD notched $2.6 billion during the final quarter of 2021, for a 32 percent year-over-year gain and an 8 percent spike sequentially.
It's telling that seven of the top 10 best selling CPUs on Amazon are Ryzen chips, including the first three spots (Ryzen 5 5600X at No. 1, Ryzen 7 5800X at No. 2, and Ryzen 5 5600G at No. 3). On top of the rabid demand, AMD noted a rise in the average selling price for its processors "due to a richer mix of Ryzen processor sales." Same goes for GPUs—the ASP increase there as well, at least year-over-year. 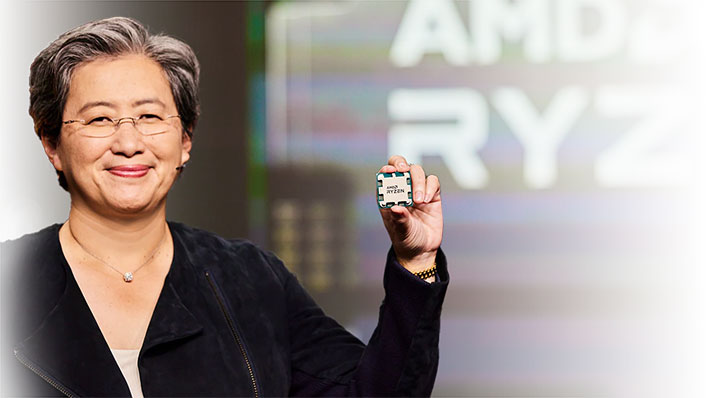 While AMD is coming off its best year, what does the future hold? That remains to be seen, but looking at AMD's roadmap, the company appears to be in great shape. We got a glimpse of this during AMD's pre-CES livestream, in which it announced a bunch of new laptop processors and announced the Ryzen 7 5800X3D with a stack of 3D V-cache to boost certain workloads (particularly gaming).
Looking ahead, AMD will launch its Zen 4 CPUs in the second half of this year, accompanied by a new AM5 socket. We'll see Zen 4 in both AMD's Ryzen 7000 series for consumer desktops and on the server side with Genoa (Zen 4) and Bergamo (Zen 4c). AMD is also preparing its "next wave" GPUs based on RDNA 3.
"Looking out over the long term, we are confident in our ability to continue growing significantly faster than the market, based on our expanded road map investments and the deep relationships we have established with a broad set of customers who view AMD as a strategic enabler of their success," Dr. Su said during an earnings call.
Dr. Su also talked about the chip shortage. noting that AMD is working on "consistent execution." She acknowledged a "supply-demand imbalance" over the past year, and said the company has "deepened the relationships" with its supply chain partners. Dr. Su also said AMD invested around $1 billion last year in long-term supply chain capacity.

"We've made significant investments in wafer capacity as well as substrate capacity and back-end capacity. We feel very good about our progress in the supply chain to meet the 2022 guidance. And our goal is, frankly, to have enough supply to satisfy the demand out there," Dr. Su said.
Investors appear confident AMD can continue to execute after reporting its best year ever, as share of the company are up more than 11 percent in pre-market trading this morning.