Back in September 2019, Amazon announced that it was ordering a total of 100,000 electric delivery vans from Rivian. This announcement came after Amazon had invested $750 million into the EV maker in its efforts to become net zero carbon across all of its operations by the year 2040.

Now, Amazon is revealing the actual production version of its electric delivery van, and not just the renders that were previously shown. The real-life vehicle is a dead ringer for the prototype renders with complete with a cutesy “face” and big, round LED headlights. Out back, you see a large grouping of LEDs tail lights shaped like an upside down “U” that completely surround the rollup rear door. Amazon says that this makes it easier for other drivers to see when the van is stopping. Rivian has installed a number of cameras on exterior of the van, which will give the driver a 360-degree view of the vehicle from the outside, which should make it easier to park and maneuver in tight spaces.

Amazon logos are of course strewn all over the exterior, and within the interior on the seats and even the steering wheel. As you might expect, there is integrated Amazon Alexa support for hands-free access to a driver’s route information and even weather updates. There’s a large LCD in front of the driver that shows charge level, vehicle speed and drive status. We can even see a condensed map/route view on this display. There’s also a larger central display which gives the driver access to climate controls, a larger map view, and infotainment controls (which we’re almost certain are tied into Amazon Music). 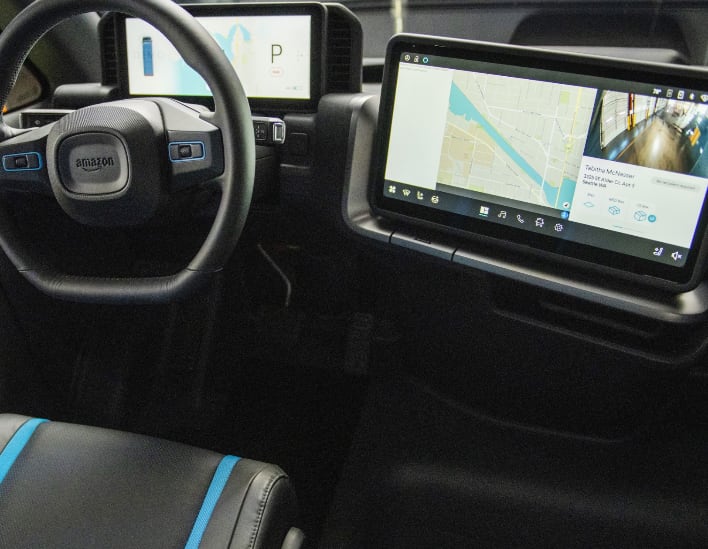 "When we set out to create our first customized electric delivery vehicle with Rivian, we knew that it needed to far surpass any other delivery vehicle. We wanted drivers to love using it and customers to feel excited when they saw it driving through their neighborhood and pulling up to their home," said Ross Rachey, Director of Amazon's Global Fleet and Products. "We combined Rivian’s technology with our delivery logistics knowledge, and the result is what you see here-the future of last mile delivery." 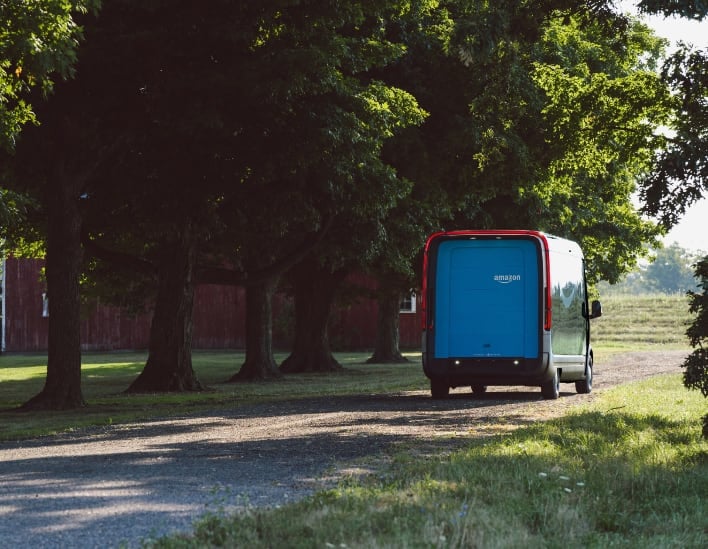