The streaming music wars are heating up now that Apple Music has entered the lossless arena. Earlier this morning, Apple announced that lossless streaming – up to 24-bit at 192 kHz – will be available to all Apple Music subscribers. Not to be outdone, Amazon Music HD, which was previously available at an additional cost, is now coming to all Amazon Music Unlimited subscribers.

Lossless options start with 16-bit at 44.1 kHz “CD quality” audio, which is available across 70 million songs in the Amazon Music catalog. The top tier is called “Ultra HD,” offering 24-bit depth at a sample rate of 192 kHz. Ultra HD, for now, is only available on 7 million songs. Like Apple’s announcement of Spatial Audio support, Amazon says that its support for 3D Audio formats is expanding at a rapid clip. Amazon Music HD supports not only Dolby Atmos but also the Sony 360RA standard. 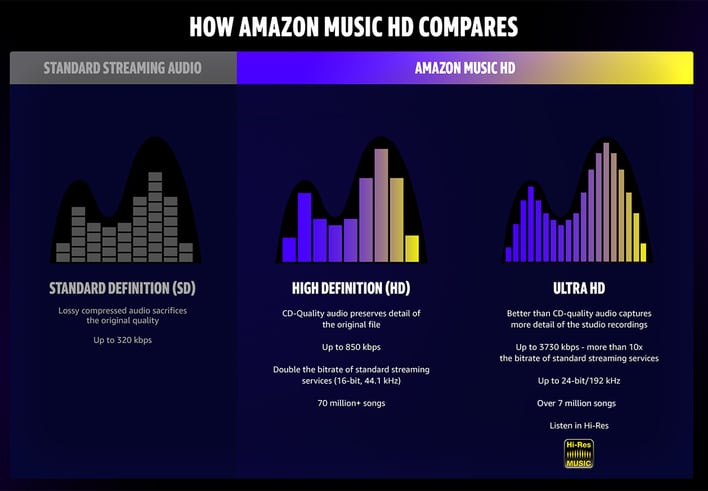 “When we first launched Amazon Music HD, our goal was to lead the industry by enabling music fans around the world to stream the best quality recording, the way artists intended their music to be heard,” said Amazon Music VP Steve Boom. “We’re thrilled now to make Amazon Music HD available to everyone at no extra cost. All music fans should have access to this quality of music, and now they do!”

Tidal, which burst onto the streaming music scene touting its lossless catalog, is now the odd man out with a monthly price of $19.99. Now that Apple and Amazon are charging half that price (or less), it’s going to be hard for Tidal to continue “business as usual” without adjusting its pricing as well.