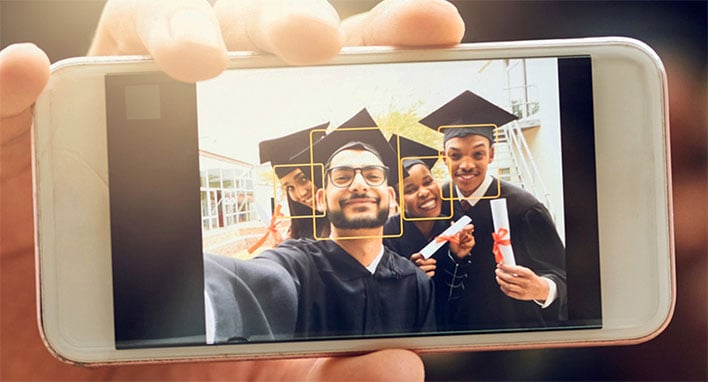 Amazon is halting the use of its facial recognition software by law enforcement officials, in hopes that the "one-year moratorium on police use of Rekognition," as the technology is called, will give Congress enough time to impose regulations ensuring its "ethical use." It's not clear if that simply means additional license will not be sold for one year, or if Amazon will also prevent its Rekognition software from functioning within police departments that already paid for it.
Either way, the American Civil Liberties Union (ACLU) wants to see a bigger commitment from Amazon over what it deems a "threat" to civil rights, not just in the here and now, but beyond the one-year ban.
"This surveillance technology's threat to our civil rights and civil liberties will not disappear in a year," Nicole Ozer, technology and civil liberties director for the ACLU, said in a statement. "Amazon must fully commit to a blanket moratorium on law enforcement use of face recognition until the dangers can be fully addressed, and it must press Congress and legislatures across the country to do the same."
Amazon's decision comes on the heels of Blacks Lives Matter (BLM) protests around the country and beyond, sparked by the death of George Floyd, who lost consciousness and ultimately died after now-fired police officer Derek Chauvin pinned him down with a knee on his neck for 8 minutes and 46 seconds. Floyd was already restrained in handcuffs.

Floyd's death has sparked outrage over the use of inappropriate police force and racial profiling. The two can be intertwined, and it is the latter that has drawn concern over facial recognition technology in general. Amazon's Rekognition software uses artificial intelligence (AI) to scan faces in real-time and match them against a database of known criminals. It is capable of scanning up to 100 human faces from a single frame of video, which it then compares against millions of potential matches.
"We’ve advocated that governments should put in place stronger regulations to govern the ethical use of facial recognition technology, and in recent days, Congress appears ready to take on this challenge. We hope this one-year moratorium might give Congress enough time to implement appropriate rules, and we stand ready to help if requested," Amazon said.

When this was deployed by police in 2018, the ACLU voiced concerns about how the technology could be abused.
"Rekognition marketing materials read like a user manual for authoritarian surveillance," Ozer said at the time. "Once a dangerous surveillance system like this is turned against the public, the harm can’t be undone. Particularly in the current political climate, we need to stop supercharged surveillance before it is used to track protesters, target immigrants, and spy on entire neighborhoods."
The technology has also been criticized for having a higher false-positive rate against darker skinned individuals, particularly black females, as Wired wrote about last year.
It remains to be seen if Amazon's one-year ban will be extended, or even permanently banned within law enforcement agencies. In the meantime, Amazon says it will continue to allow certain organizations to use Rekognition, including the International Center for Missing and Exploited Children, and Marinus Analytics, "to help rescue human trafficking victims and reunite missing children with their families."