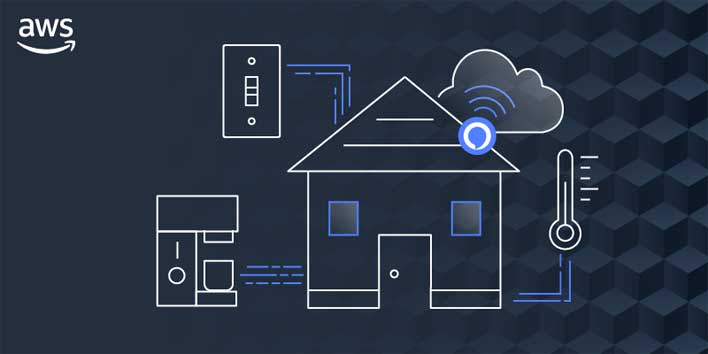 Amazon has announced Alexa Voice Services Integration as a new feature of the AWS IoT Core that will enable device makers to make any connected device an Alexa built-in device. Amazon says that AVS for AWS IoT Core reduces the cost and complexity of making these devices. The system offloads compute and memory-intensive tasks from the physical device to the cloud.

The new service will allow products like light switches, thermostats, small appliances, and more to come to the market with Alexa functionality. The service allows the consumer to talk directly to Alexa in new parts of their home, office, or hotel rooms for an ambient experience. Amazon says that until now, AVS solutions for Alexa Built-in products required expensive application processor-based devices with >50MB of memory running on Linux or Android.

Those requirements made it cost-prohibitive to integrate Alexa Voice on resource-constrained IoT devices. AVS for AWS IoT enables Alexa built-in functionality on MCUs like ARM Cortex M with <1MB embedded RAM by offloading memory and compute tasks to a virtual Alexa built-in device in the cloud.

AVS Integration for AWS IoT Core introduces new reserved MQTT topics for communication with AVS. Devices communicate over a single, secure MQTT connection to AWS IoT Core from the device makers AWS account. The AWS account forwards MQTT messages to AVS, which processes the audio data and sends a response back to the device via AWS IoT Core.

Amazon says that devs will need a device certificate, private key, or root CA installed on the device firmware. Devs will be able to get kits launched by APN partners to make it easy to get started, including the NXP i.MX RT 106 A and Qualcomm Home Hub 100 Development Kit for Amazon AVS. In other Alexa news, recent demos of Alexa and Google Home spying hacks were revealed that show how susceptible the devices are to hackers.