Ethereum mining seems to be all the rage these days, and companies like NVIDIA are looking to cash in on the crypto mining gold rush. In February, NVIDIA announced its Crypto Mining Processor (CMP) HX family of dedicated Ethereum cards, with hash rates ranging from 26 MH/s for the CMP 30HX up to 80 MH/s for the CMP 90HX.

According to NVIDIA, in the middle lays the CMP 40HX, which has a stated hash rate of 36 MH/s. However, the performance of an alleged prototype ASUS CMP 40HX card has been revealed, and it is shaping up to be quite impressive. VideoCardz was sent an image of a rig featuring not one but eight ASUS CMP 40HX cards. And instead of puttering along at the official 36 MH/s hash rate, these cards were each pumping out over 43 MH/s. 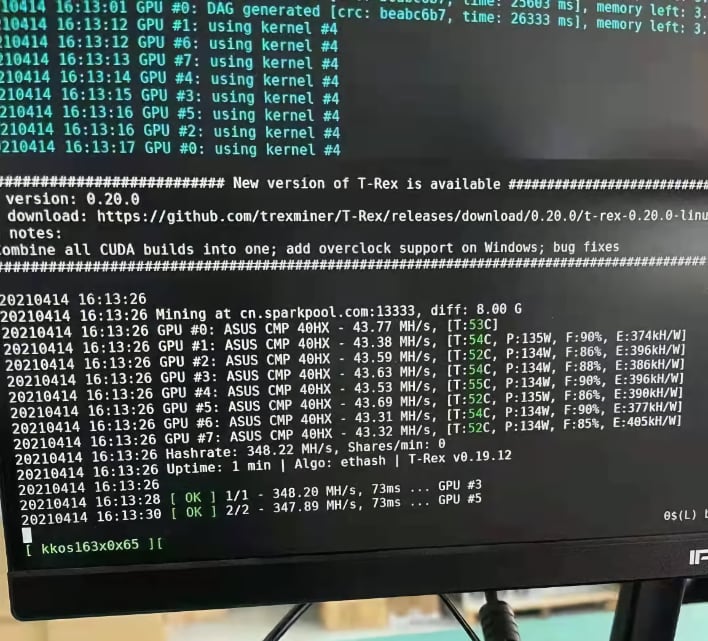 That performance puts them within earshot of the CMP 50HX, which has an official hash rate of 45 MH/s, according to NVIDIA. It's unclear what kind of tweaks that ASUS or the alleged tester performed to get this increased performance, but it's impressive. Even more interesting is that the CMP 40HX is rated for 185 watts, but each of these ASUS cards is running at just 135 watts.

We should all take this information with a grain of salt, as these images could be easily faked. However, if true, they show some excellent potential for those looking to score some money on the side with Ethereum mining.

The ASUS CMP 30HX, which we've previously seen in pictures, is expected to carry a price tag of $599. ASUS' CMP 40HX, however, will reportedly come in at $699, according to VideoCardz. However, the big problem will be finding either card at MSRP, which will likely be next to impossible.