While some motherboard manufacturers are taking a selective approach regarding enabling PCIe 4.0 support, it's good to hear that MSI made the necessary hardware choices on the backend to make this possible. "To be PCIe 4.0 compatible, several components on the motherboards are necessary, including PCIe 4.0 ready clock generator, lane switch, redriver, PCIe slots, and M.2 connectors," said MSI in a blog post. "Thanks to the complete PCIe 4.0 solutions, MSI Z490 motherboards provide the most stable design for PCIe 4.0 and unlock the full performance of PCIe 4.0 devices."

With this full compliance, you'll be able to plug a PCI 4.0 graphics card like the GeForce RTX 3080 -- if you can find one at MSRP -- into a free PCI Express x16 slot or a Samsung SSD 980 Pro into a free M.2 slot and get maximum performance. In the case of the Samsung SSD 980 Pro, yes, that means that you'll be on the receiving end of 7,000 MB/sec sequential reads and 5,100 MB/sec sequential writes. 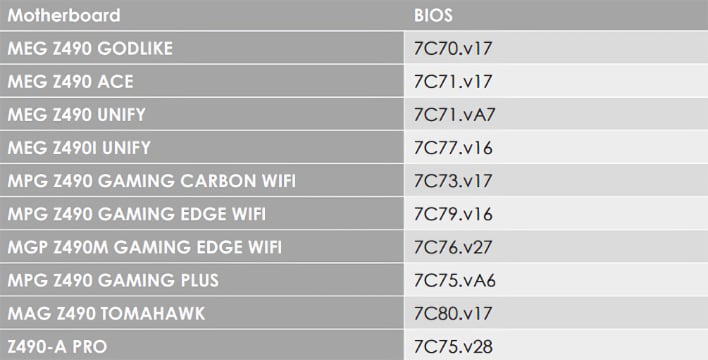 A list of MSI's current Z490 motherboards and the necessary BIOS to enable full PCIe 4.0 compliance is listed above.

Intel will launch its Rocket Lake-S desktop processors later this month, and they'll be going head-to-head with AMD's Zen 3-based Ryzen 5000 family. Intel is promising up to a 19 percent uplift in IPC performance over the current-generation Comet Lake family, along with improvements to multi-core performance. However, one thing to note is that Rocket Lake-S will top out with just 8-core/16-thread configurations (Core i9-11900K). The previous flagship, the Core i9-10900K, offered 10 cores and 20 threads. However, Intel is confident that the underlying architectural changes will allow the Core i9-11900K to provide superior performance across-the-board.