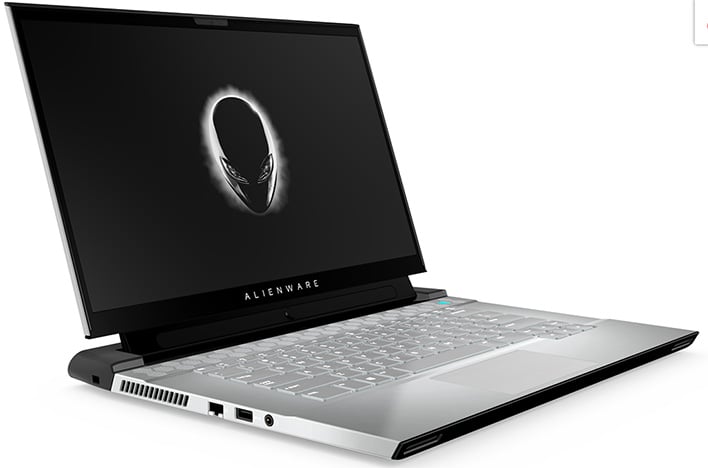 Wnen we reviewed the Alienware m15 R2 last year, we noted that Dell had "not yet circumvented the laws of physics" to allow a potent gaming laptop to keep temps totally in check, with so much high-end hardware underneath the hood. Simply put, it could get hot under load. It seems Dell has tackled the challenge with aplomb, however, as this year's Alienware m15 R3 apparently runs much cooler, and does it without a major redesign to the chassis.
In our own testing of last year's model, the GeForce RTX 2070 Max-Q inside our test system did actually keep potentially toasty temps at bay, by never jumping past 75C at load. But on the CPU side, the Core i7-9750H in our test configuration got pretty hot—four of the CPU's six cores hit 100C at some point during our 90-minute stress test. Yikes!
We have not had a chance to test the R3 yet, but the folks at NotebookCheck have, and they observed an "insane" drop in temps. As in, a 25C drop at stable operation. That is pretty incredible.

Like us, they saw uncomfortably high CPU temps on the R2 last year, reaching 99C in their own testing when gaming on Turbo mode. But with the latest R3 model, which has been upgraded to an Intel Comet Lake-H platform, stable CPU temps dropped to 73C, on a Core i7-10750H chip. Likewise, the GPU (GeForce RTX 2070 mobile) temp saw a decrease as well, from 70C to 65C.

How was Dell able to bring CPU temps down by so much? Better cooling, is the answer. While the R3 is again touting an "Advanced Alienware Cryo-Tech" cooling solution, the use of vapor chamber technology inside the latest revision seems to paying big dividends.
"The new Alienware m15 is engineered with a dedicated vapor chamber in between the CPU and copper heat pipes. It's all designed to manage the thermal flow and maximize performance. These chambers utilize the phase-changing nature of liquid to transfer heat more effectively than a solid piece of metal or copper heat pipes. Vapor chambers are also more versatile than copper heat pipes in that they can be designed to be spread evenly across an entire chip that needs to be cooled," Dell explains.
In addition, Dell beefed up the dual fans with 25 percent more blades, and bolstered the copper piping, which is 39 percent heavier than last year's model. The sum of all those parts is a more capable cooling solution, with a significant reduction in CPU temps, and a modest drop in GPU temps, according to outside tests (we'll be interested to see if our own testing yields the same impressive results).
The catch is that the R3 is a little bit heavier. Whereas the R2 checked in at 4.75 pounds (2.16kg), the heaviest version of the R3 weighs 5.5 pounds (2.5kg). Fair trade off, as far as we are concerned.