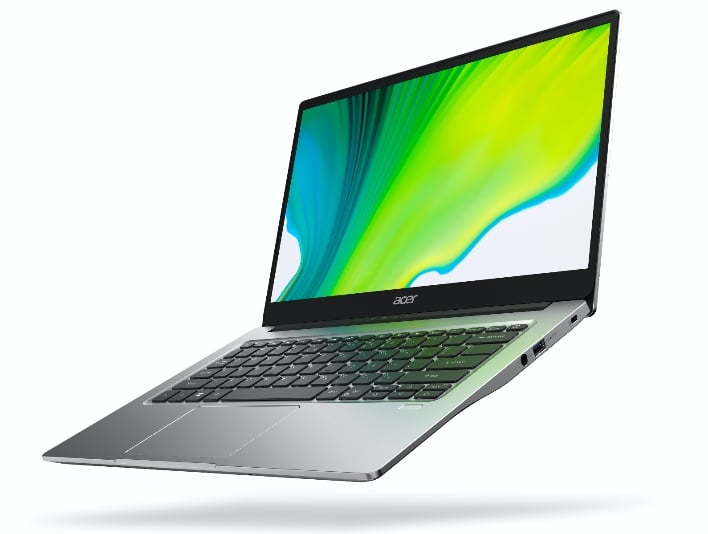 Two weeks ago, AMD officially launches its Zen 2-based Ryzen 4000 mobile processor family, which is available in both H-Series (gaming/creative laptops) and U-Series (premium ultraportables). AMD's Ryzen 4000 processor family represents AMD's most comprehensive and performance-packed counter to Intel's mobile Core processors in years, and Acer is among the first to fully embrace them.

Acer today has announced the Swift 3 (SF314-42) and Swift 5 (A515-44) laptops. Starting off with the former, it's a thin-and-light laptop featuring AMD's 8-core/8-thread Ryzen 7 4700U processor. This processor features 12MB of cache along with base/boost clocks of 2GHz and 4.1GHz respectively. The Ryzen 7 4700U also manages to pack in a Radeon Vega 7 GPU with a graphics clock of 1600Hz. Finally, the U-Series processor has a TDP of just 15 watts.

The Swift 3 uses a 14-inch Full HD display with bezels that measure just 0.22 inches thick (which adds to a screen-to-body ratio of nearly 83 percent). The notebook itself features an aluminum chassis and a display lid that is made from a combination of aluminum and magnesium. This contributes to a device that is just 0.63 inches thick and weighs only 2.6 pounds.

Finally, Acer says that the Swift 3's battery can last for up to 11.5 hours per charge, and can go from empty to providing a 4-hour runtime after just 30 minutes with the included charger.

Moving on to the Aspire 5, this machine is equipped with the Ryzen 5 4500U, which is a 6-core/6-thread processor with base/boost clocks of 2.3GHz and 4GHz respectively. When it comes to integrated graphics, the processor has a Radeon Vega 6 GPU clocked at 1500MHz. Acer says that the Aspire 5 can be equipped with up to 24GB of memory and up to a 1TB PCIe SSD. If you so desire, you can also add an old-school HDD up to 2TB in capacity. Tying everything together is a 15.6-inch Full HD display.