Laptops and other devices have become increasingly important in the field of education over the last year. These kinds of devices need to be relatively affordable and able to withstand a school environment. Acer has just introduced several new devices that fit into these requirements. Acer’s two new convertible Chromebooks, two clamshell 11.6-inch Chromebooks, and TravelMate Spin B3 convertible Windows laptop are targeted at students.

The Chromebook Spin 512 and Spin 511 feature Intel N4500 and N5100 processors, up to 64GB eMMC storage and 8GB RAM, and up to ten hours of battery life. Both devices include up to an 8MP MIPI world-facing camera and a 88-degree wide-field-of-view HDR webcam. These cameras will help facilitate online instruction. Both devices have 360-degree hinges that allow students to position the devices in four different usage modes. 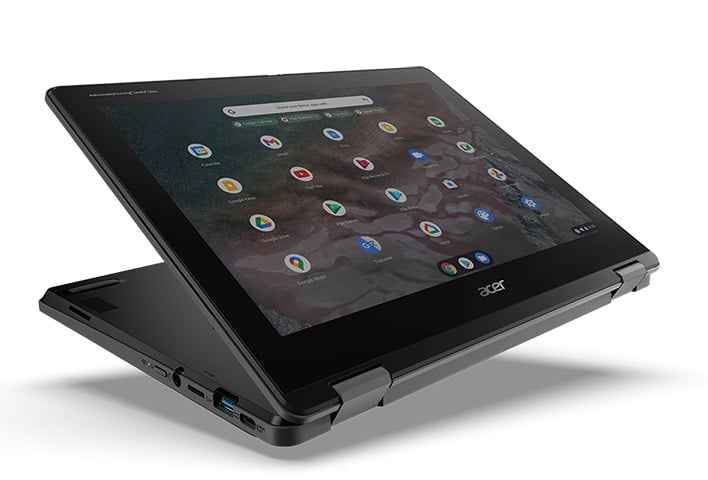 These new Chromebooks were especially built with classroom use in mind. They incorporate a shock-resistant bumper, widened brackets that aid in supporting the panel, and I/O ports that are reinforced with metallic plates. They also feature a spill-resistant “quickly serviceable keyboards,” moisture-resistant touchpads, and Antimicrobial Corning Gorilla Glass displays. To top it off, the Spin 512 includes a “BPR & EPA-compliant silver-ion antimicrobial agent” in the coating of its keyboard and the surface around it.

The TravelMate Spin B3 convertible Windows laptop is marketed toward classrooms that use technology frequently. It features up to the latest Intel Pentium Silver processor, Wi-Fi 6, and up to twelve hours of battery life. It also includes a shock-absorbent bumper and Antimicrobial Corning Gorilla Glass. Consumers can also add 4G LTE connectivity and/or a Wacom AES pen to give the device even more uses. 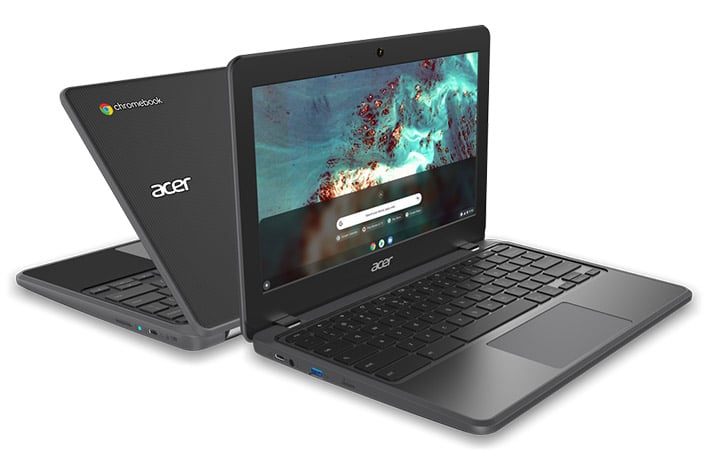 Acer is also offering more traditional clamshell Chromebooks. The Chromebook 511 features a Qualcomm Snapdragon 7c Compute Platform and 4G LTE connectivity. The device is intended to allow students to learn on the go. The Chromebook 311 has a Mediatek MT8183 processor and up to 20 hours of battery life. It has reportedly passed several durability and safety tests and is aimed at younger students.

All of the above devices are intended to reduce the spread of germs, survive the often rough hands of younger students, and provide more options for students, teachers, and guardians. Devices that can withstand all the drops and spills that come with a classroom environment are welcome. Online education at the K-12 level has also only increased over the last year. A greater variety of devices is therefore good news for students and educators.