Generally speaking, if you want the brightest picture money can buy, mini LED is the way to go. But for the best overall image quality, including true black levels, OLED still holds the advantage. Obviously these blanket statements will vary by model, but for the most part OLED is still king. They're just relatively expensive, though that may change soon.
It's already happening to some extent. There was a time when a big screen OLED TV would set you you back a king's ransom. Now you can find 65-inch models for well below two grand—Sony's A80J Bravia XR OLED is $1,598 on Amazon, while Vizio's OLED65-H1 is marked down to $1,462.49 right now. And if you trusted a renewed unit, a 65-inch LG A1 series (2021) can be had for $1,089.99, shipped and sold by Woot (which Amazon owns). 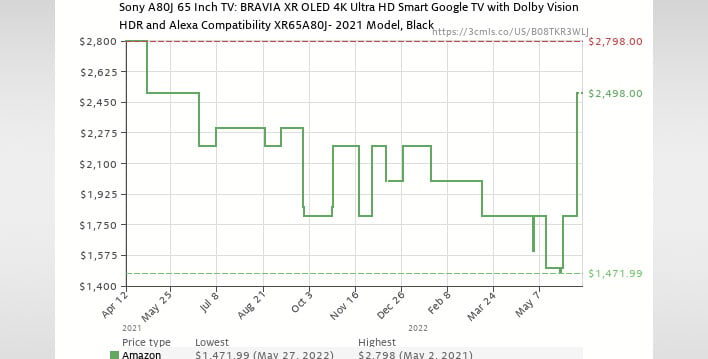 Prices are trending in the right direction, as that same Bravia XR OLED sold for just under $2,800 when it came out last year. There's a good chance that by this time next year, or even earlier, we'll see even better prices on OLED TVs. That's because another player is entering the OLED panel manufacturing game, giving LG Display and Samsung Display some added competition.
Korean newspaper Biz Chosen reports that China's BOE is preparing for commercialization of large screen OLED TVs ranging in size from 55 inches all the way to 95 inches.
BOE is the largest display company in China. It currently produces OLED panels primarily for smartphones, but will begin testing its R&D production lines with plans to ship 300,000 bigger screen OLED panels this year. it also recently showed off a giant 95-inch 8K OLED TV in California earlier this month. That particular set is said to be similar to the premium models that LG is making, with a 120Hz refresh rate and 800 nits brightness.
It's said that BOE is shifting to larger screen OLEDs because of "rapidly increasing" demand. Recent reports also suggest that Apple dropped BOE as an OLED supplier for its iPhone 13, so perhaps that is playing a role in its plans to pivot.
Either way, adding another player to the mix could drive prices down even further, both from the added competition and the sheer number of units that will infiltrate the market. Speaking to the latter, the Korean paper reports that OLED panels for TVs will surpass 10 million units for the first time this year.
We suspect that the continued rise in mini LED models will drive down OLED prices too. Some of the better mini LED models get fairly close to OLED in image quality, with the added benefits of being brighter and not being susceptible to burn-in.
However it shakes out, 2023 is shaping up to be the best year for upgrading your TV.