This quarter, smartphone shipments have been up as we hope to enter the downhill slide of the pandemic. At the head of the pack was Samsung with 19% of shipped smartphones, but sneaking up behind is Chinese manufacturer Xiaomi with a 17% share, knocking Apple down to third place with a 14% share.

Xiaomi's impressive overtake in the mobile device market is due in part to a preliminary estimate of the company's annual growth rate at 83%. This is quite impressive when compared to Apple's measly 1% growth and Samsung's 15%. Canalys Research Manager Ben Stanton explained that "Xiaomi is growing its overseas business rapidly," as "its shipments increased more than 300% in Latin America, 150% Africa and 50% in Western Europe." 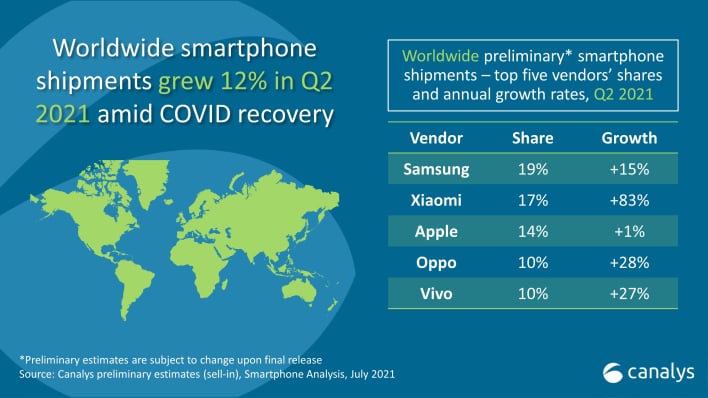 Stanton continues, reporting that Xioami likely already has a goal of "displacing Samsung to become the world's largest vendor." This will be helped by a lower selling price on devices with decent specifications than the two competitors. However, "a major priority for Xiaomi this year is to grow sales of its high-end devices, such as the Mi 11 Ultra," to compete at both ends of the top five vendors list.

Furthermore, "all vendors are fighting hard to secure component supply amid global shortages," so this will not be an easy battle. Thankfully, the previous ban on Xioami from the Trump administration has been lifted, so we could see more growth in the US as well. This could certainly lead Xioami to overtake Samsung and become the world's largest smartphone vendor, but we will have to see what happens shortly.