In the current landscape, just tracking down a GPU that's in stock and selling for its regular price feels like winning a prize. However, you can actually win a high end graphics card for real (as in, not pay for it), GeForce RTX 3090, with NVIDIA CEO Jensen Huang's autograph plastered on the box too boot. It will take some legwork, though, and a whole lot of luck.
It's worth the effort, as the GeForce RTX 3090 is still the top dog until the GeForce RTX 3090 Ti arrives. To recap the specs, you're looking at a card powered by NVIDIA's GA102 Ampere GPU with 10,496 CUDA cores, 328 Tensor cores, 82 RT cores, 328 TMUs, 112 ROPs, and 24GB of GDDR6X memory tied to a 384-bit memory bus for 936.2 GB/s of memory bandwidth.
Yeah, it's a beast and has the chops to handle 4K gaming. So, about that giveaway? NVIDIA shared some details about the giveaway on Twitter. 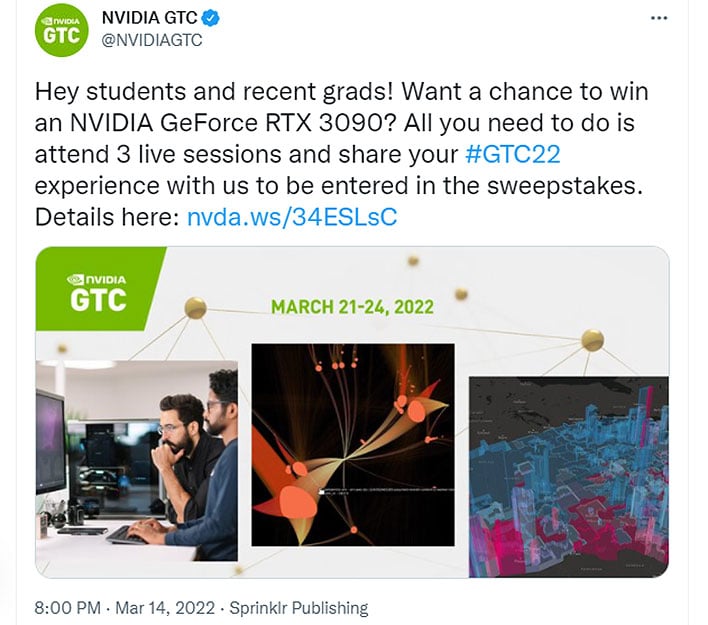 Not everyone can enter, unfortunately (or fortunately, depending on your perspective)—the sweepstakes is open to students and recent graduates, presumably from any educational institution. There's some additional legwork to make yourself eligible. You have attend three live sessions at NVIDiA's upcoming GTC 2022 event, and then fill out a form, part of which entails providing feedback about your experience (4-5 sentences).
It's not clear how many cards NVIDIA will be giving away. However, the folks at PCWatch shared some photos of Jensen signing multiple Founders Editions boxes. There looks to be at least six of them. 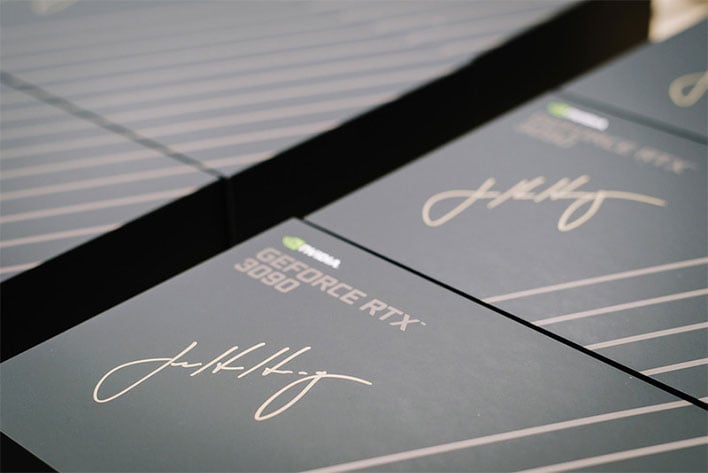 A GeForce RTX 3090 Founders Edition has a $1,499 MSRP. A quick check of recently sold listings on eBay shows that cards in new condition fetch around $2,200. An autographed model undoubtedly increases the value, though whether these cards end up on eBay or not, we can only wait and watch.
Regardless, it's pretty neat that NVIDIA is doing this. If you're a student and want to enter, be sure to register for GTC 2022 and attend at least three events, then fill out the GTC Student Passport Sweepstakes form (submissions will be accepted from March 22 to March 25).