In the days of old, important files were kept in locked file cabinets, and the really important stuff would be secured inside a safe. And to some extent, that is still the case today. However, nearly everything is digitized these days, and so Western Digital is launching its new ArmorLock security platform to keep sensitive data away from prying eyeballs.
For the time being, this is not something that the typical home consumer needs to worry about—Aunt Mabel's passed-down cookie recipe might be a hit at school bake sales, but data thieves have bigger targets. Those targets exist within finance, government, healthcare, IT enterprise, legal, and media and entertainment industries, and that's where ArmorLock comes into play.
"Facing the threat of hijacked media files and leaked films, studios, agencies, and especially investors are demanding a better way to protect critical content. While much of the industry's focus has been on cloud security, data often remains vulnerable on the portable storage devices holding critical commercial content," Western Digital explains. 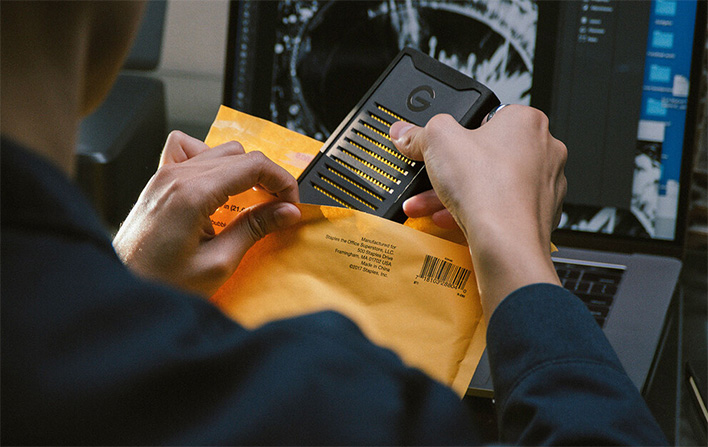 ArmorLock is an advanced data encryption platform powering high-grade security solutions, starting with Western Digital's brand new G-Technology ArmorLock encrypted NVMe SSD. This particular product is primarily aimed at creators within the media and entertainment industry, offering security and easy access.
Some of the key features of ArmorLock include...
The first ArmorLock product is an external NVMe SSD that is rated to deliver read and write speeds of up to 1,000MB/s, when plugged into a SuperSpeed USB 10Gbps port. On the security side of the equation, Western Digital is touting a "zero-knowledge" solution. Rather than having to input a password, it works in conjunction with a smartphone app.
"With the ArmorLock app, users can unlock the device wirelessly with their phone, using face recognition, a fingerprint, or the phone's passcode ensuring lost passwords don't cause missed deadlines. The SSD provides encryption without getting in the way of the workflow by enabling collaboration without the need to tape PINs to the drive," Western Digital says.
The drive is housed in an "ultra-rugged" enclosure that is rated IP67 for dust and water resistance, along with drops of up to 3 meters and 1,000-pound crush resistance.
Buyers can purchase the ArmorLock SSD now in 2TB form, priced at $599 in the US.