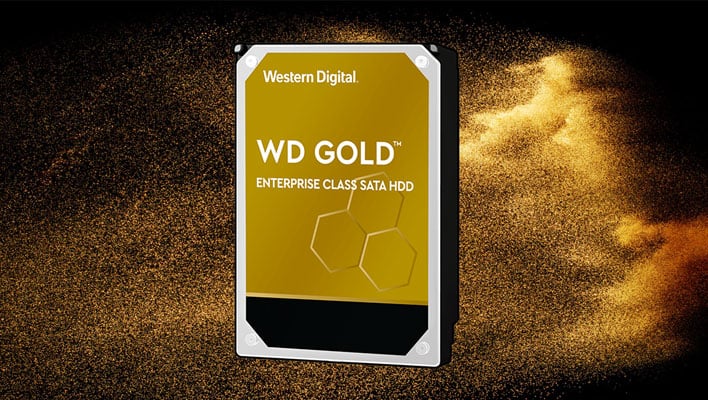 We have been hearing about massive capacity hard drives in the neighborhood of 18TB (and even higher) for several months now, but they have remained elusive products. Not anymore, apparently. An online retailer in the UK is now accepting orders for Western Digital's 18TB and 16TB Gold HDDs, neither of which have actually been announced yet.
The landing page on Western Digital's website for its Gold series still lists capacities ranging from 1TB to 14TB, and nothing bigger. That said, we can tell you that the new 18TB and 16TB models are aimed at enterprise customers, as these storage drives are designed to withstand the rigors of 24x7 usage.
"WD Gold has sophisticated monitoring electronics that help correct linear and rotational vibrations in real time using enhanced vibration protecting technology for improve performance in high-vibration environments," Western Digital explains.
Here is a look at pricing...
These drives will likely cost less when they arrive in the US, though they will not be cheap—you can probably expected them both to land between $500 and $600.
As listed in the UK, pricing as-is works out to around three-and-a-half cents per gigabyte. That is roughly in line with what WD Gold drives cost. As a point of reference, the WD Gold 14TB sells for $449.95 on Amazon, which works out to around $0.032 per gigabyte.
In addition to touting protective measures, these WD feature conventional magnetic recording (CMR) instead of shingled magnetic recording (SMR) technology, with a 7,200 RPM spindle speed. Certain specifications are not provided, though it's likely both models tout 512MB of cache, just like the 14TB model does, with data transfers of around 267 MB/s. They also carry 5-year warranties.