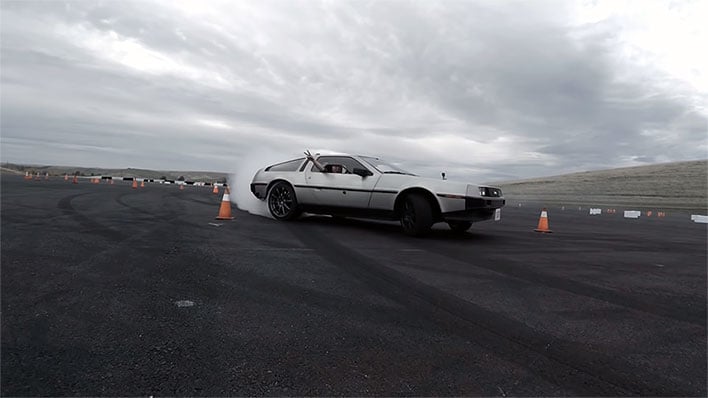 These are some wild and wonderful times we live in, folks. When I was a kid, shows like The Jetsons made me think there would be flying cars in the future. Perhaps there still will be. In the here and now, however, autonomous vehicles have emerged and are gaining traction. Where that leads us remains to be seen, but a new demonstration by Stanford's Dynamic Design Lab has me wondering if one day in the not-too-distant futures there will be races and driving competitions strictly for self-driving vehicles.
Perhaps one day self-driving cars will go up against human opponents. Machine versus human is not a new concept, after all. IBM's smarty pants Watson dominated the flesh and blood competition on Jeopardy, and neural networks like OpenAI Five have shown they can dominate seasoned gamers in strategy games like Dota 2.
Alas, I digress a bit. You can forgive me for it, though, because you have to check out this video of a driverless DeLorean navigating and expertly drifting through a kilometer-long obstacle course with traffic cones at Thunderhill Raceway in Northern California. Have a watch...

At the end of the video, one of the engineers half-jokingly exclaims, "It's almost like as though we did some math for this." Lots of math, I'm sure, along with physics, programming, and clever engineering all around.

The engineers took a 1981 DMC DeLorean and "extensively modified" it into a "flexible testbed for automated controls at and beyond the limits of handling." Appropriately enough, the end result is called MARTY, as in Eng, the most infamous DeLorean driver outside of Doc Brown. In this case, MARTY stands for Multiple Actuator Research Test bed for Yaw control.
Drifting is fun to watch (and a blast if you're the one behind the wheel, in a controlled environment of course), but it also serves a scientific purpose that extends well beyond the entertainment value, as it applies to self-driving cars.

"Through drifting, we’re able to get to extreme examples of driving physics that we wouldn’t otherwise," said John Goh, a recent mechanical engineering PhD graduate from Stanford. "If we can conquer how to safely control the car in the most stable and the most unstable scenarios, it becomes easier to connect all the dots in between."
It's an important demonstration as we move towards a world where autonomous vehicles will inevitable become commonplace. One of the concerns is the overall safety. Self-driving cars are not immune to accidents, but as with many things (though not all things), they can potentially be safer than a human driver.
"Suddenly the car is pointed in a very different direction than where it’s going. Your steering wheel controls the speed, the throttle affects the rotation, and the brakes can impact how quickly you change directions," Goh said. "You have to understand how to use these familiar inputs in a very different way to control the car, and most drivers just aren’t very good at handling the car when it becomes this unstable."
Computer-controlled steering is only part of the equation, though. The modified DeLorean is equipped with electric motors that provide 7,000 Nm of torque to each rear wheel, two GPS antennas to track MARTY's position within an inch, electronically controlled brakes to better braking precision, and a custom suspension designed with endure intense drifts and rapid turns. It's not a standard grocery getter, in other words.
You can hit the link in the Via field to read more about MARTY, or if you want to really dive into the nitty-gritty details, the first in a series of journal papers related to this experiment is available to view.