Today's launch will include two identical Geosynchronous Space Situational Awareness Program (GSSAP) satellites (GSSAP-5 and GSSAP-6), directly to a near-geosynchronous orbit approximately 22,300 miles (36,000 km) above the equator. The two satellites will serve as a neighborhood watch service that will improve flight safety for all spacefaring nations operating in the same orbit. Data that is collected from the GSSAP will provide unique timely and accurate orbital predictions, and will enhance the ability to warn a spacecraft owner/operator if there is impending danger of another object approaching too closely.

The mission will also include the maiden voyage of the Atlas V 511 configuration, and the only planned flight for it. The 511 is the last of the not-yet-flown configurations in the Atlas family, according to a mission description from ULA. You can view the scheduled 2pm launch below via livestream.

Making up part of the launch vehicle for today's flight is a payload fairing (PLF) 17 ft (5 m) in diameter. The PLF is constructed with a vented aluminum-honeycomb core and graphite-epoxy face sheets. Both the Centaur and the satellite are encapsulated in the two-piece shell of the PLF.

A Centaur second stage, which is 10 ft (3 m) in diameter and 41.5 ft (12.6 m) in length, is a cryogenic vehicle that is fueled with liquid nitrogen and liquid oxygen. It is powered by an RL10C-1 engine that produces 22,900 lbs (101.8 kilo-Newtons) of thrust. According to ULA, "The Centaur forward adapter provides structural mountings for the fault-tolerant avionics system and electrical interfaces with the spacecraft."

Also along for the ride is a booster that is 12.5-ft (3.8 m) in diameter and 106.5-ft (32.5 m) in length. The booster's propulsion is provided by the RD-180 engine system, which is a single engine with two thrust chambers. It provides 860,200 lbs (3.83 mega-Newtons) of thrust at sea level. Another solid rocket booster (SRB) will generate the additional power required at liftoff, providing 371,550 lbs (1.6 mega-Newtons) of thrust. The Centaur avionics system provides flight control, guidance, and vehicle sequencing functions during the Centaur and boosting stages of flight. 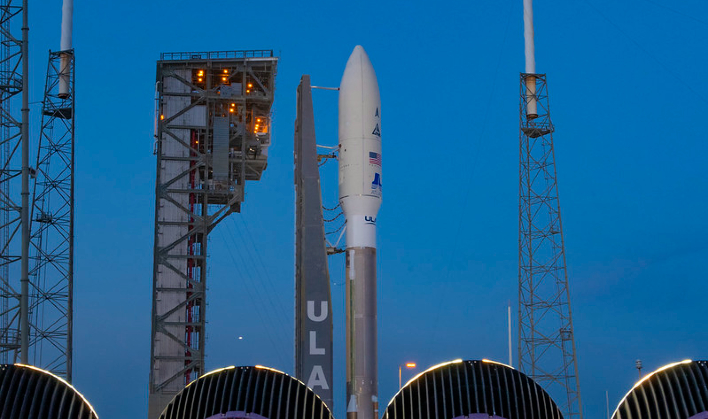 The payload fairing, Centaur second stage, and the booster stand 196 ft. (59.7 m) tall when all combined.

Today's launch will be the fifth and sixth GSSAP spacecraft to take flight. The first four were launched on two separate occasions, one in 2014 and the other in 2016. GSSAP satellites enable the U.S. Space Command to keep a close eye on the other satellites in geosynchronous orbit. Geosynchronous orbit occurs when a satellite's orbital velocity matches the speed of Earth's rotation. This particular orbit is a favorite for weather, communications and surveillance satellites, because spacecraft tend to stay over the same patch of the planet continuously.