The United States Army has posted a video showing what the battlefield looks like through the eyes of a solider equipped with a new set of night vision goggles, and it is pretty spectacular. It almost looks like something out of an artsy music video (remember those?) or a video game, with a semi-neon outlines giving soldiers a better view of their surroundings.
When you think about night vision goggles, you probably conjure up images in your mind of a greenish landscape. That is how it is usually depicted in movies, like Step Brothers, and is how it actually looks with some night vision goggles. However, the Army's new Enhanced Night Vision Goggle-Binoculars (ENVG-B) are a different animal.
Have a look...

You have never seen night vision like this! #readynow #QuietProfessionals pic.twitter.com/3TCPtnno1r

In the video, shared by the Second Stryker Brigade Combat Team, 2nd Infantry Division (otherwise known as the Lancer Brigade), the battlefield and its inhabitants look more like a scene from Halo 3: ODST than what traditional night vision goggles depict.
One of the comments in the Twitter thread points out that it "almost looks like a cartoon," to which the Lancer Brigade replied, "Luckily there are multiple settings. We just thought this one made great video footage." And indeed it does, at least from our perspective. 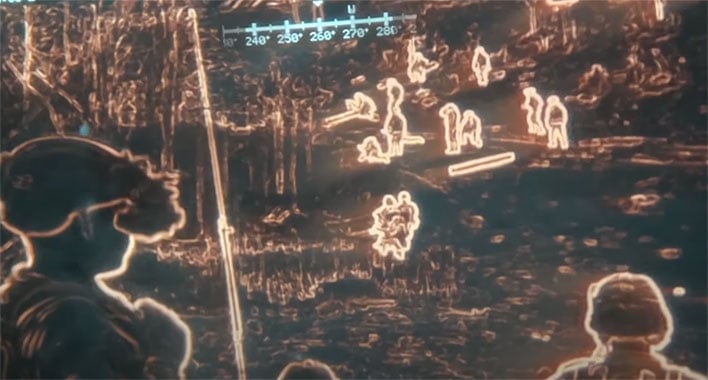 According to Task & Purpose, the US military has been working for years on improving its night vision capabilities, now that its adversaries have access to some of the same technologies. These new goggles are a cut above—they allow soldiers to see through rain, fog, sleet, and even dust. There's also a thermal setting that makes it easier to see things during the day time.
Other settings provide different kinds of views. For example, one of the options is to light up a nighttime environment so that it looks like daytime, just with a red and gray tint.
The goggles can also be combined with another new piece of hardware called the Family of Weapons Sights-Individual (FWS-I). This gadget is typically mounted on a weapon to allow soldiers to see around corners. The night vision goggles can display feeds from both the ENVG-B and FWS-I at the same time, allowing for views from multiple angles.
This also plays into the increasingly high tech nature of the military, as newer technologies emerge. For example, Microsoft recently inked a $22 billion deal to supply modified HoloLens augmented reality headsets to troops. The Integrated Visual Augmentation System, as it is called, includes two low-light cameras, a thermal sensor, a tactical radio, tactical assault kit software, maps, rapid target acquisition, a commercial GPS receiver, and a conformal battery all on board a Microsoft commercial HoloLens 2.
All of these things can potentially work together to keep US troops safer on the battlefield, and more easily take out targets at greater distances.