Despite what you may have seen on the web, there does not exist an official DisplayHDR 2000 certification, at least not yet. Maybe a higher tier is in the works. Either way, the Video Electronics Standards Association (VESA) that oversees the DisplayHDR specification and related certifications is not the least bit happy with an electronics retailer promoting the non-existent standard.
A pair of monitor listings at Chinese retail website Taobao drew VESA's ire, and prompted an official response from the organization. One was for a presumably newer version of Samsung's Odyssey G9 monitor and the other for Acer's EI491CRG9, both of which the retailer advertised as being DisplayHDR 2000 certified, compete with VESA's logo.
No such tier exists, and VESA wants to make that crystal clear.
"VESA has no knowledge of the origins of the DisplayHDR 2000 logo currently posted on these display listings on the Taobao website. However, VESA takes any misuse of our trademarks and logos seriously. VESA does not endorse the use of this logo unless and until a DisplayHDR 2000 tier has been officially announced by VESA, and any products claiming to meet this tier level have been officially certified by VESA and are listed on our website," VESA said. 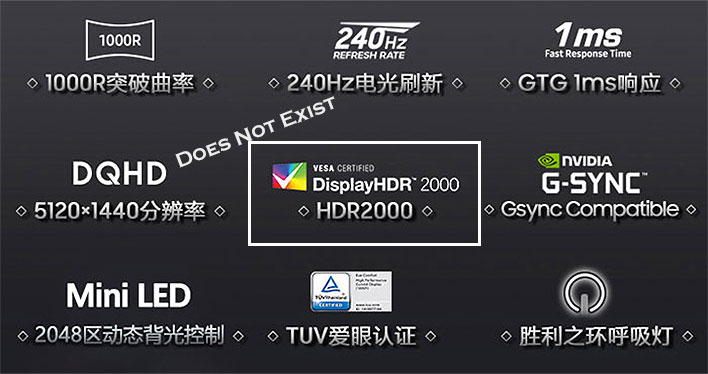 DisplayHDR 2000 is not an official designation

As things currently stand, VESA promotes several different DisplayHDR certifications, ranging from DisplayHDR 400 on up to DisplayHDR 1400. Those numbers denote a brightness threshold monitors must be able to meet, in order to qualify. So to be eligible for the DisplayHDR 1400 badge, which is currently the highest tier, a monitor would need to be able to hit an eye-searing 1,400 nits brightness level. Brightness is just part of the criteria, albeit the main one. Ttypically when it comes to LCD monitors, a high brightness level is needed to do HDR content justice, preferably in the range of 1,000 nits, as we saw in our ASUS ROG Swift PG27UQ review.
Interestingly, VESA's statement on DisplayHDR 2000 is worded in such a manner as to leave open the possibility that it might exist at some point. Depending on your perspective, VESA might even be hinting at the spec being in the works.

An updated Odyssey G9 for 2021 and Acer's aforementioned model might both be capable of hitting a 2,000 nits brightness level. Neither model has been formally introduced, though, and despite leaving the door open for a new DisplayHDR tier, VESA says "any such logo usage should be assumed to be unapproved and deceptive." Strong words for sure.