Have you ever tried to buy a game but found that it was not available in your region for some unknown reason? This may be due to a practice Valve’s game platform Steam does, called “geo-blocking.” This is done to lock out certain countries from getting a particular game or to manage pricing worldwide. The European Commission, the executive branch of the EU, took issue with the latter and has now fined the gaming company approximately $1.9 million.

According to the European Commission website, “geo-blocking” is how a company “segment[s] markets along national borders and to increase profits to the detriment of foreign customers.” They claim that Valve, and five other publishers, including Bandai Namco, Capcom, Focus Home, Koch Media, and ZeniMax, engaged in unjust geo-blocking alongside Valve. 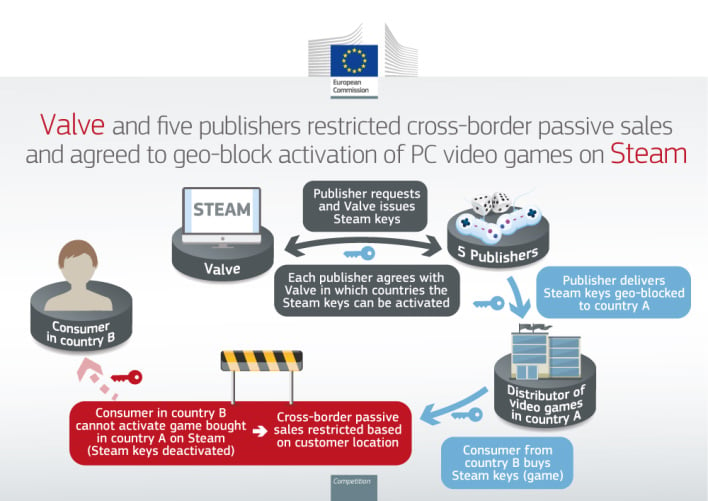 As the posting states, “The combination of Steam activation keys with the territory control function,” which is given to publishers to use at their discretion, “enables the ‘geo-blocking’ of PC video games based on the geographical location of the user.” The publishers then created and distributed these geo-blocked activation keys, which meant “users located outside a designated Member State were prevented from activating a given PC video game with Steam activation keys.” If this complicated situation still does not make much sense, the European Commission included the handy graphic above.

Overall, the Commission says that over 100 games from various genres were included in the geo-blocking practices. To ensure something like this does not happen again, the Commission handed out a total fine of $9.5 million across the companies. Some companies had their fines also reduced for cooperating with the investigation, whereas Valve did not. As mentioned earlier, Valve only received an approximate $1.9 million fine, which is likely a fraction of what the company is worth. It is less a slap on the wrist and more a poke with a finger. Either way, let us know what you think of this geo-blocking and subsequent fine in the comments below.