It took less than two weeks for Valheim to notch over two million sales, after releasing to Steam's Early Access program. Just as impressively, if not more so, the unfinished survival game reached a peak concurrent player count of 360,000 over the weekend. It is one of the most played games on Steam right now, behind only Counter-Strike: Global Offensive, Dota 2, and PlayerUnknown's Battlegrounds.
Those are some big time juggernauts to be mingling with on Steam, and in terms of peak concurrent users, it is fast approaching third place—at the time of this writing, the Steam Database portal shows Valheim peaking at 392,862 today, just slightly behind PUBG at 398,518.
"Forget longboats, we have now blown a 700+ year old record by boasting the largest Viking population in all of human history. For reference, the previous peak in Viking numbers was set in 1300 AD and was approximately 500,000," developer Iron Gate AB wrote. 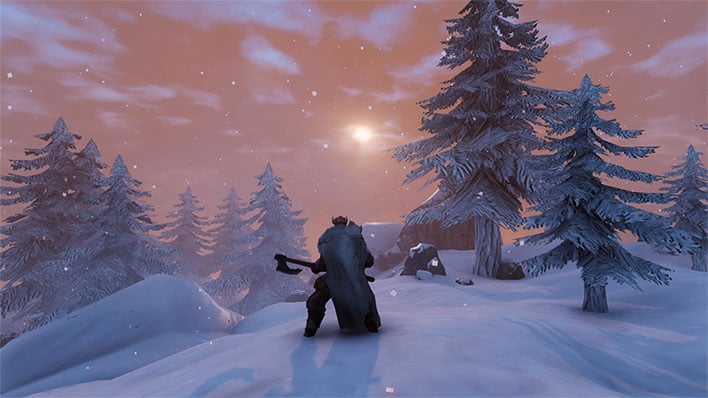 Valheim has become a viral smash hit in a short period of time. The numbers would even make Rust blush, which saw its concurrent player count peak at a more-than-respectable 244,394 last month. Apparently the survival genre is even more interesting when vikings are involved, because quite frankly, Valheim is going gangbusters at the moment.
Part of the appeal is being able to play solo or in co-op mode. I am among the two million people who purchased the game in Early Access and fired it up over the weekend for a relatively brief stint, and can attest it is a fun title. My character "Dingus" has not accomplished a whole lot, but I am having a good time controlling his progress in the procedurally generated world he inhabits.

The old school graphics also seem to have struck a chord with gamers as well. According to the small development team, the visuals are inspired by an earlier era in 3D graphics, and specifically PlayStation 1 and MS-DOS era games. There is a certain charm to the low res textures.
If you want to see for yourself what all the fuss is about, you can buy Valheim on Steam for $19.99.