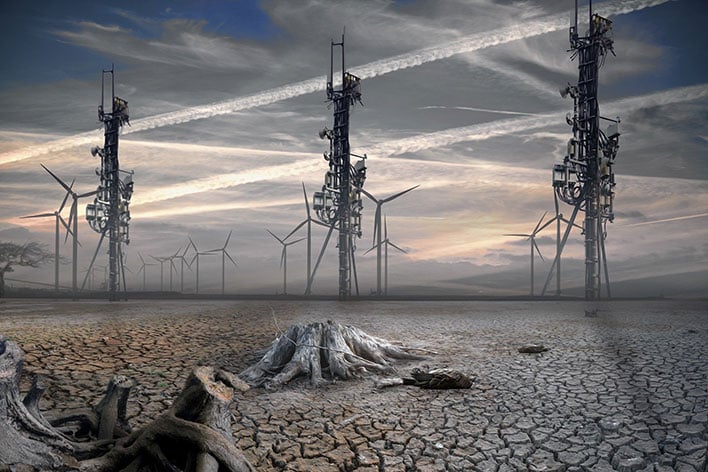 People with too much time on their hands and a penchant for conspiracy theories have set ablaze or otherwise vandalized dozens of cell towers in the UK, over the unsubstantiated fear that 5G wireless is somehow responsible for spreading COVID-19. In addition, technicians for telecoms have faced harassment while on the job.
Sadly, it is not just random people on the Internet who are perpetuating the conspiracy theory. Actors Woody Harrelson and John Cusack have both posted about it online.
"A lot of my friends have been talking about the negative effects of 5G," Harrelson wrote on Instagram, accompanied by a screenshot of an article drawing links between the Coronavirus outbreak in Wuhan and 5G development in the region. The post has since been deleted, but how knows how many of his 2 million followers saw it.
Part of the problem is the lack of information about COVID-19 as a whole—no vaccine exists yet, and there is not much in the way of treatment. According to Wired, this particular conspiracy theory began when a Belgian newspaper posted an interview with a doctor, who said there "may be a link" between 5G and the spread of the Coronavirus.
The doctor's comments were picked up by anti-5G compaigners, who linked and quoted the article on Facebook. It spread quickly, and then cell towers began to burn by people taking matters into their own hands.
According to MSN, there have been more than 30 acts of arson and vandalism against wireless towers and other telecom gear in the UK this month. There have also been around 80 acts of harassment towards telecom workers. It even prompted a response by the UK Government Department for Digital, Culture, Media, and Sports (DCMS), which noted "there is absolutely no credible evidence" of a link between 5G and COVID-19, calling claims to the contrary "crackpot conspiracy theories."
"We have received several reports of criminal damage to phone masts and abuse of telecoms engineers apparently inspired by crackpot conspiracy theories circulating online. Those responsible for criminal acts will face the full force of the law," DCMS stated on Twitter.
There are multiple conspiracy theories fueling this nonsense. One of them claims that people are simply getting sick from 5G signals, not COVID-19 (in other words, COVID-19 doesn't exist). Another one claims 5G signals weaken the immune system. Needless to say, it's all bogus. Sure, a 5G cell tower could spread the infection—if an infected person coughed on it, and a healthy person proceeded to lick the droplets (or touch them and then their face).

Outside of that, 5G towers are not making things worse. What about the radiation emitted? As the US Environmental Protection Agency (EPA) points out, "Non-ionizing radiation is not strong enough to directly affect the structure of atoms or damage DNA." That's not to say there are no risks associated with extremely high RF energy levels, but those typically occur directly next to the equipment.
"When RF energy is very strong, such as from radar transmitters, it can be dangerous. It can heat parts of your body very rapidly and cause serious injuries, like severe burns. These extremely high RF energy levels are only found near powerful equipment, such as long-distance transmitters," the EPA states.
"Radiofrequency energy decreases as it travels in atmosphere, which means that it gets weaker the farther it is from the transmitter. Powerful long-distance transmitters usually do not create high-level RF energy on the ground. If there is a ground level hazard from RF energy, there are safety requirements to prevent the public from dangerous exposure. Transmission towers that produce hazardous levels of RF have warning signs and security in place that limits access to only authorized personnel. These warnings and access restrictions should always be followed to keep you safe," the EPA continues.
The takeaway to all this? Don't lick, burn, or climb cell towers.