Total Lunar Eclipse Will Soak The Night Sky In A Super Blood Moon, How To See It

A lunar eclipse will occur on May 15-16, as the Sun, Earth, and Moon align so that the Moon passes into Earth's shadow. Some will be privy to a total eclipse, which is often referred to as a Blood Moon due to its reddish hue.

Most people will be able to simply step out into their backyard and look skyward in order to watch the eclipse, with a total eclipse being viewable for those in most of America, Europe, and Africa. That means there will be a potential viewing audience for the upcoming total eclipse of 2.7 billion people. Of course, for anyone wanting to gaze upon the Blood Moon that looms, your chance for optimal viewing will depend on how clear the night sky is, as cloud cover can diminish or block the view of the Moon itself.


Below is a chart from NASA that lets you know what you can expect to observe during the eclipse: 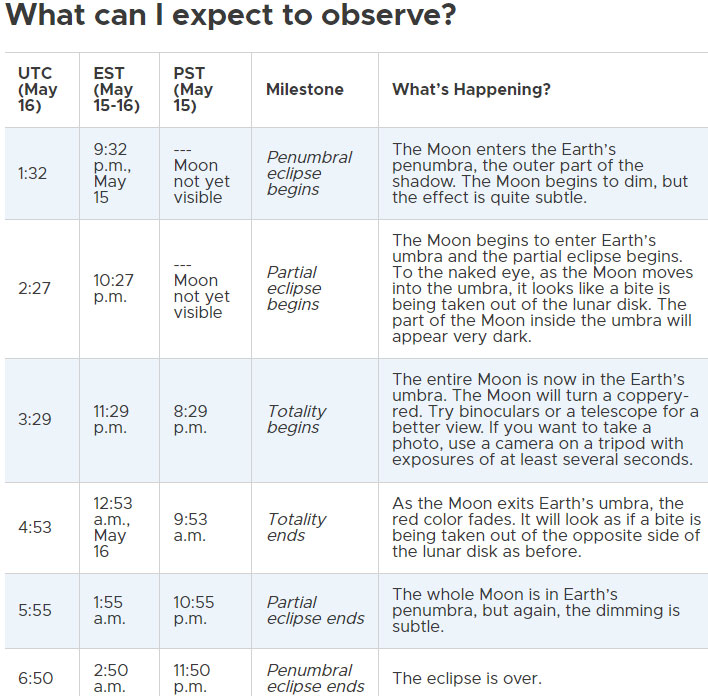 If you have wondered what causes the Moon to turn a reddish hue during an eclipse, it is the same phenomenon that makes our sky blue and our sunsets red through a process called Rayleigh scattering. Different colors of light have varying physical properties. Blue light has a shorter wavelength than red light and is scattered more easily by particles in Earth's atmosphere.

Red light travels more directly through Earth's atmosphere. Therefore, when the Sun is overhead, blue light is scattered across the sky. However, when the Sun is setting, light from the glowing star must pass through more atmosphere and travel farther before becoming viewable to our eyes. This causes the blue light to scatter away, and longer wavelengths, such as red and orange light, to pass through.

If you happen to be in a location where the weather is not in your favor for viewing the upcoming lunar eclipse, or are not in the viewing region, NASA will feature live streams of the eclipse from various locations across the United States.