The photographs were taken to celebrate the Tianwen-1 mission’s achievements from the past year and were published by the China National Space Administration (CNSA). The camera that took the photographs, the TDC-2, is one of two deployable cameras. The camera snapped the photographs and then sent them to the orbiter via Wi-Fi. The photographs are quite beautiful and offer a glimpse of Mars that is not often seen. An image of the Martian surface from the Zhurong rover has also been published. The image was created by combining three total photographs. 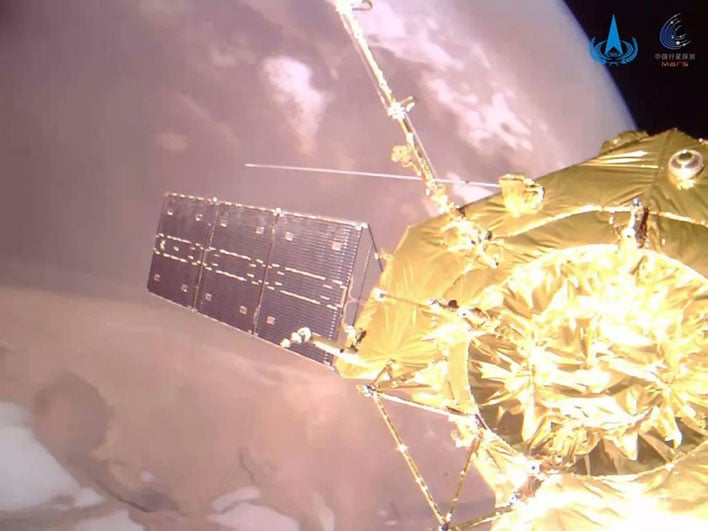 Tianwin-1 has a total of six spacecraft including the above-mentioned orbiter and Zhurong rover. The mission’s main purpose is to study the planet’s geology and atmosphere and to look for signs of past or potentially present presence of water. It launched from the Wenchang Spacecraft Launch Site in Wenchang, Hainan, China on July 23, 2020 and entered Mars' orbit in February 2021. The Zhurong rover and lander touched the Martian surface on May 14, 2021. 2021 has therefore been a major year for the Tianwen-1 mission and the CNSA.

The CNSA has at least one very ambitious plan for 2022. It hopes to complete the Tiangong space station by the end of the year and make it fully operational by 2023. The ZhengHe comet and asteroid exploration mission was originally supposed to launch this year, but has been delayed until 2025.

NASA also recently showcased images from Mars. They released a video on December 28, 2021 that celebrated the achievements of the Perseverance rover that landed on the Martian surface last February. The video also discussed the mission’s goals and plans and featured a few images taken by the rover. Jessica Samuels, the Perseverance surface operations mission manager at NASA's Jet Propulsion Laboratory in Southern California, remarked, “It feels great to be a part of making history, and enabling the start of a Mars Sample Return campaign. What motivates us as engineers and scientists exploring another planet is the opportunity to learn more.”