The fine folks over at Pine64 this week posted their February Update to give us a heads up on where it stands with current and future products. There was a lot to unpack with this latest update, but one product that really caught our attention is the Quartz64 single board computer (SBC).

Although it's currently only being shown in prototype form, it's expected that production version of the Quartz64 won't look too different from what you see above. Pine64 is quick to point out that there are a lot of similarities between the new Quartz64 -- which is the first member in the company's new Quartz family -- and the existing ROCKPro64. That means that you'll find dual USB 2.0 ports, a USB 3.0 ports, and a PCIe x4 slot. You'll also find an HDMI port along with IR, DSI, CSI, and SDIO headers. There's even a SATA port to handle storage duties along with GbE, eMMC slot, and a microSD reader. The Model A doesn't come with wireless connectivity, while the Model B comes with Wi-Fi 5 and Bluetooth 5.0. In other words, the Quartz64 is feature-packed, and you won't be left wanting when it comes to connectivity. 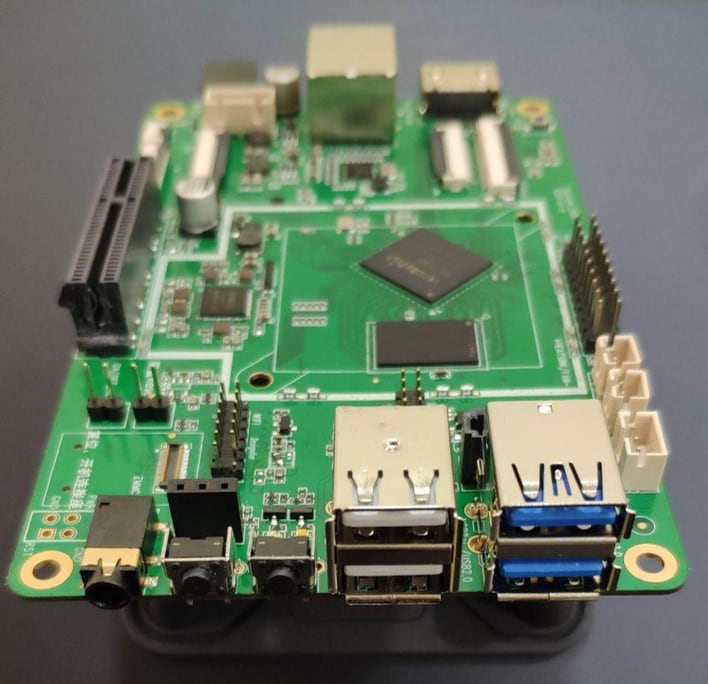 Powering things is a Rockchip RX3566, which is a quad-core Cortex-A55 based SoC that can clock up to 1.8GHz and an 800MHz Mali-G52 GPU. The Quartz64 comes standard with 2GB of RAM, but it can optionally be configured with up to 8GB of LPDDR4. Pine64 says that the Quartz64 is roughly 15 to 25 percent slower than the ROCKPro64, and that is shouldn't be considered as a Pro-grade machine. Instead, it is being positioned as a successor to the ROCK64 and the PINE A64.

With that being said, performance is very comparable to the Broadcom BCM2711 SoC found in the Raspberry Pi 4 according to provided Geekbench numbers. However, Pine64 says that the Rockchip RX3566 won't spend much time above 60C when under load without a heatsink installed. The Quartz64 is a relatively large SBC, with a footprint of 5.2" x 3.1" compared to 3.37" x 2.22" for the Raspberry Pi 4.

Unfortunately, Pine64 says that it's currently "too early to talk about general availably", so we'll have to wait a while before the Quartz64 goes on sale. However, Pine64 promises that it will provide additional details on the Quartz64 on its next community update, which will hopefully land in March.