It was only two months when T-Mobile trounced Verizon and AT&T in a 5G wireless speed test showdown, with Ookla reporting a 191.12Mbps median download speed for the self-proclaimed Un-Carrier. At the time, T-Mobile talked up its earlier investments in mid-band 5G spectrum. Following up on that, T-Mobile announced it was able to aggregate three channels of mid-band 5G spectrum to achieve a speed of over 3Gbps on its standalone 5G network.
According to T-Mobile, the achieved feat is a first on a commercial device, that being a Samsung Galaxy S22 handset powered by Qualcomm's Snadpragon 8 Gen 1 mobile platform. 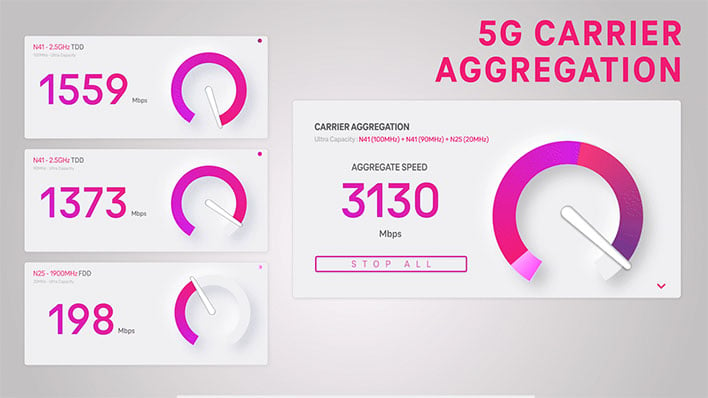 "This test demonstrates the incredible power of mid-band spectrum and represents another huge step forward for standalone 5G," said Neville Ray, President of Technology at T-Mobile. "Only T-Mobile is delivering a nationwide standalone 5G network to customers today, and we’re blazing a trail with new performance-boosting capabilities that generate incredible speeds and deliver on our vision to create the highest capacity network in the country."
T-Mobile's 5G Carrier Aggregation (NR CA) enables the wireless outfit to combine multiple 5G channels (or carriers) for faster speeds. In this case, T-Mobile merged three 5G channels, including a pair of 100MHz 2.5GHz channels and a 10MHz 1.9GHz channel, to effectively create a speedy 210MHz 5G channel.
According to T-Mobile, this combination is only available on standalone 5G—there's no reliance on 4G. It's also supported on the Snapdragon X65 modem that's part of the Snapdragon 8 Gen 1 chipset, and as such, T-Mobile says that Galaxy S22 owners will be among the first to experience a third 1.9GHz 5G channel later this year. Additional devices will be added to the fold "in the near future."