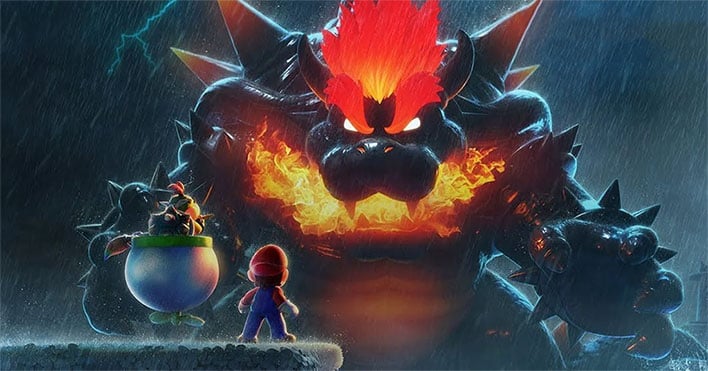 Bowser is one perpetually grumpy dude, and also persistent. Unfortunately for Super Mario and the gang, he is about to become a gargantuan menace. As in, literally gargantuan, like Godzilla or King Kong. And fortunately for gamers, he's headed to Super Mario 3D World + Bowser's Fury for the Nintendo Switch next month. Will you be up to the challenge?
You may recall that the original Super Mario 3D game launched to the Wii U (remember that console?) back in 2013. The platform title supported co-op with up to four players, with characters like Mario, Luigi, Peach, and Toad. Many gamers have fond memories of the title.
Super Mario 3D World + Bowser's Fury is a port (or expansion) of that game to the Nintendo Switch, with a new Bowser's Fury mode that was not included in the original release. So even if you played the original, there is added incentive to check out the new version. In anticipation of the game's release, Nintendo has released trailer. Have a look...
"Pounce and climb through dozens of colorful stages! Mario (and his friends) can use power-ups like the Super Bell, which grants catlike abilities, like climbing and scratching. Work together locally*or online with up to three other players to reach the goal…and to see who can get a high score.," Nintendo explains.
The game retains the same co-op gameplay, levels, and power-ups as the original title, but also includes a bunch of new goodies (included updated graphics, of course). You'll team up with Bowser Jr. to stop his very angry (and very big) dad from wreaking havoc.
Super Mario World + Bowser's Fury is available to preorder for $59.99, and will release on February 12, 2021.