If you've ever done any livestreaming on Twitch, YouTube, or similar services, you're probably already familiar with Open Broadcaster Software (better known as "OBS"). The application has more-or-less conquered the streaming software space, likely in large part because it is both free and open-source. The facts that it's easy to set up and it works like a charm don't hurt, either.

OBS has had Twitch integration since early in 2019, allowing users to sign into Twitch through the application and manage their stream that way, instead of having to have a separate window open just to manage stream settings. Folks who stream to YouTube have been stuck doing it the old way —until today, that is. The project's maintaners just released OBS Studio version 27.1 for Windows, Mac, and Linux, and along with it, support for YouTube integration.


The addition of these services to OBS means that you don't have to fumble with clunky stream keys anymore. Just like with Twitch, you can now login to your YouTube account through OBS, and manage features like your stream title, description, and privacy settings right in the OBS client. You can also use YouTube's services to perform bandwidth testing to find the optimal settings and server for sharing your stream. There's even a chat dock so you can view your stream's live chat, although it's currently read-only. 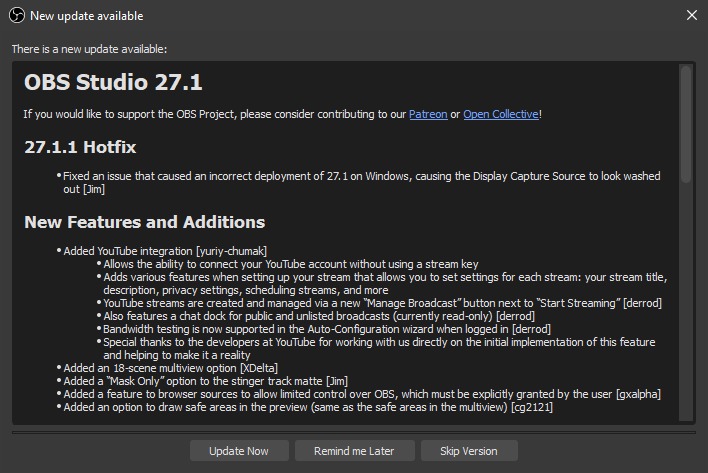 The new version also integrates performance fixes for preview builds of Windows, including preliminary Windows 11 support as well as Windows 10 Insider builds. Other major improvements in the new build include bug fixes for hardware encoders, improved support for third-party overlays, many tweaks for better Linux support (especially for Wayland users), and a myriad of minor performance upgrades, particularly for users that make use of the "media" source type.

If you're already an OBS user, the application will surely ask you to upgrade the next time you launch it. If it doesn't—or if you're a new user—you can head to the project's Github to read the release notes and grab the latest version.