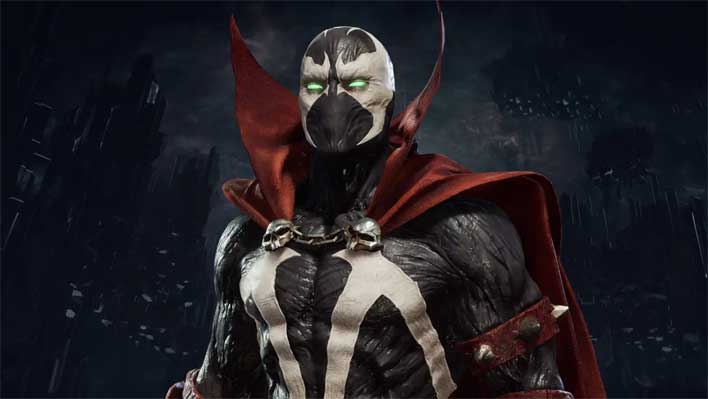 When it comes to comic book characters, Spawn is one of the icons. NetherRealm Studios has announced that on March 17, Spawn will be coming as a playable character on the popular fighter game Mortal Kombat 11. NetherRealms says that to get Spawn into the game correctly, it had to "nail" the presentation of his iconic weapons - the cape and chains.

The studio says that it met regularly for six months to develop the tools needed to allow the designers and artists to fully explore their imaginations to bring Spawn to the game. The result is the cape and chains that are fully integrated into his core gameplay. The weapons can be used for offense or defense and allows Spawn to fly.

His fatality is called "Rest in Pieces," and the chains and cape work together to destroy the enemy. The fatality sees the cape grab the beaten opponent, and the chains tear the enemy apart. Spawn has numerous other abilities that were culled from the original comics, including the ability to create illusions, conjure demons, and blast opponents with Necroplasm. Spawn has a commando outfit, one that directly references his comic book origins, and what the team calls the iconic Spawn outfit.

The team says that they also dug into Spawn lore to build emotional connections between him and Mortal Kombat characters to explore in the in-game dialog. To make the character as authentic as possible, the original voice of Spawn, actor David Keith repriseshis role for MK11. Keith was the voice of Spawn in the HBO animated series "Todd McFarlane's Spawn." Spawn lands on March 11 as part of the early access period for Kombat Pack owners with general availability on March 24. Kombat Pack owners also get a "Hellspawn" Jacqui Briggs skin and Matinee Skin Pack ion March 17. We first talked about the Kombat Pack back in August of last year.