It will be around a full year before Sony rolls out its next-generation PlayStation 5 console, and in the meantime, we are left to scrape details from little nuggets Sony shares here and there, the usual rounds of leaks and rumors, and perhaps patent applications as well. As it pertains to the latter, Sony was just recently granted an interesting patent that could potentially turn any single-player game into a multi-player experience.
As things currently stand, developers choose to make a game single-player or multi-player, and players are pretty much bound to that decision. There are end-arounds, of course, such as taking turns controlling a character if two or more people happen to be in the same room. But whether that makes sense depends on the game, and the situation.
Sony's patent (PDF), which was filed around the middle of 2018, describes a sort of similar concept as one of the potential multi-player aspects. It really relates to the controller, and potentially the DualShock 5 (if Sony implements any of what it describes).
By leveraging the cloud, multiple gamers in different locations could share the duties of character control in a single-player game. It's essentially a "bifurcation" scheme, and while it sounds interesting, I'm not sure it would catch on if Sony ran with the idea. 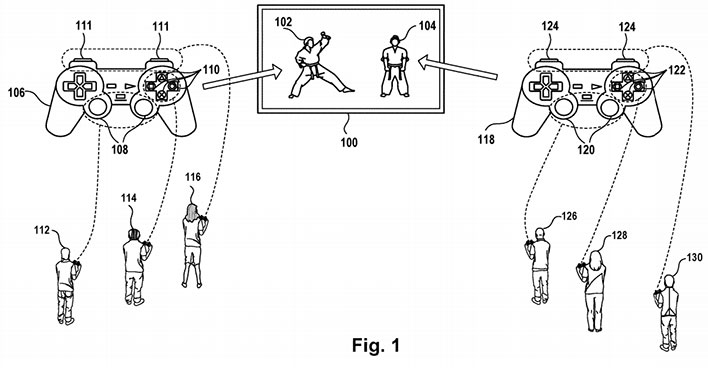 In one of the descriptions, Sony talks about multiple people controlling different actions from the same character. Imagine a fighting game. One person could control the character's movement, while a friend that lives down the street for across the globe could input various attacks (kicks, punches, etc). By doing this, a single-player fighting game becomes a multi-player experience, albeit in a weird way.
The same could apply to a first-person shooter or a third-person title, or pretty much any game. Whatever the case, it's based on divvying up the different parts of a controller—one person could control the thumbsticks, another one could have control of the main buttons, and yet another player could take control of the triggers.
I see this as being more of a hassle than a fun experience, though I suppose it depends on the game (and gamers). That's not the only use-case scenario, though. Another one Sony describes is taking turns controlling a character. This could be done through a timer, or when certain goals (such as points) are achieved. One person would control the character to begin, and after a set amount of time or after achieving a certain goal, another person would get a turn.
This is more interesting to me, as opposed to multiple people trying to get in sync with controlling parts of a character at the same time. Whether any of the functions described actually make it into the PS5, however, we will have to wait and see. The PS5 is set to launch in holiday 2020.