Sonos Wireless Headphones Are On The Horizon According To Patent Filing 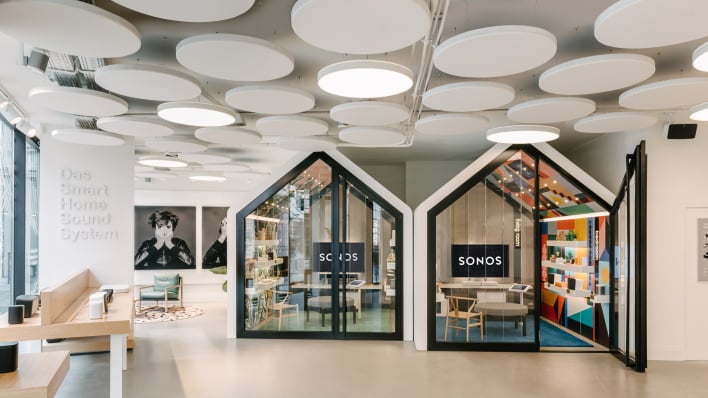 Based out of Santa Barbara, California, Sonos is a manufacturer for sound devices around the home. The patent which they were awarded last week shows off a device that looks like a pair of headphones. The idea of Sonos-made headphones has floated around for a while, and now something has come to fruition. Below we have put in some of the imagery from the patent.  It looks like there are two models differing in design.  The patent documents share some details of a possibly rather nice set of headphones despite the differing models.

It is very possible that some of these features will not make the final cut. Sonos just wants to be able to lay claim to the features and implement them if it is feasible. No matter what, this is what we have from the patent filing so far:
Capacitive or Proximity Sensors For Controls


In several embodiments, one or more controls are touch controls that can operate by any of a variety of mechanisms, such as but not limited to capacitive or proximity sensors, which can detect touch from a user at one or more locations on the sensor. Some touch sensors may be an array of touch sensors. While the description below may reference an arrangement having certain controls on a left earcup and others on a right earcup, it is also contemplated that the sides that the controls are on can reversed.

It is not often you see headphones with capacitive touch. Sonos could implement something beautiful and sleek if they pull this off.
Voice Assistant Button (For Alexa or Google?)


As with many headphones, you can either hold a button or speak a wake word to activate a voice assistant. This feature does not come a surprise, but it is a welcome addition nonetheless.

In several embodiments, tapping and holding triggers a swap. A swap involves shifting where content is currently playing to a different device. For example, if a particular piece of content play is currently playing on the wireless headphone, a swap changes the playback to play that piece of content on one or more other playback devices on the local network (or devices that are not on the local network but are associated with the same user account as the wireless headphone).


As Sonos is known for whole home audio, this also does not come as a surprise. It will be, however, a handy feature. If you are walking from room to room with the Sonos sound system and you want to block out the world, putting on Sonos headphones and seamlessly transferring your currently playing content would be awesome.

Additional controls on the wireless headphone can include, active noise cancellation (ANC), power button, and/or device pairing button. These may be physical buttons or touch controls on either earcup. The ANC control can toggle between different modes of using ANC on the wireless headphone, such as toggling between ANC on and off and/or hear-through mode (i.e., amplifying ambient sound).


Going along with the blocking out the world theme, active noise cancelling (ANC) is another great feature. This will make the headphones great for going out and about on flights, among other things.


In some further embodiments of the invention, the wireless headphone also includes connectors, such as a line-in jack for an audio input (e.g., 3.5 mm) and/or a charge port. In some embodiments, the charge port is a USB-C connector.


With some devices requiring wireless headphones, and others not, it is nice to see the possibility of options.  Also, USB-C charging is a nice feature which goes with the unification of a charging standard.


Again, none of these features are totally confirmed, but they could all add up to a formidable headphone competitor. Sonos makes premium products, and there would be no reason for them to not continue that streak.

No matter what, stick around HotHardware for any news on these headphones, as we will keep our eyes out for any sort of announcement from Sonos. Also, let us know what you would think of a pair of Sonos headphones in the comments below.