Kids these days will never understand the joys and horrors of America Online (AOL) and Instant Messenger. However, they can now understand a bit of what we experienced in the late 90’s/early 2000s. A team recently successfully reverse engineered the aolserver for AOL 3.0 to make it possible to sign onto the service.

The aolserver for AOL 3.0 was reverse engineered by a Canadian programmer known as “Zip” who purposely learned and used Python for the project. They noted that “The backend of AOL, or rather the forms embedded in its client, are written in a scripting language from 1991 aptly named FDO91.” However, they further commented that they are doing their best to work with what they have and are working on getting “VPD/Rainman running for easy form design.”

Those who are interested in capturing some of the AOL magic can join the related discord server and find installers for both 16 and 32 bit versions of AOL 3.0. It was noted that the developers are in the “alpha” phase of the project and only early adopters will be able to grab a screen name. One of the “RE-AOL” team member's screen names is “God” and they encourage those who are interested to add them to their Buddy List and send them an instant message. Information about the project is currently available on LiveJournal and the team promises to frequently update their entry as information becomes available. 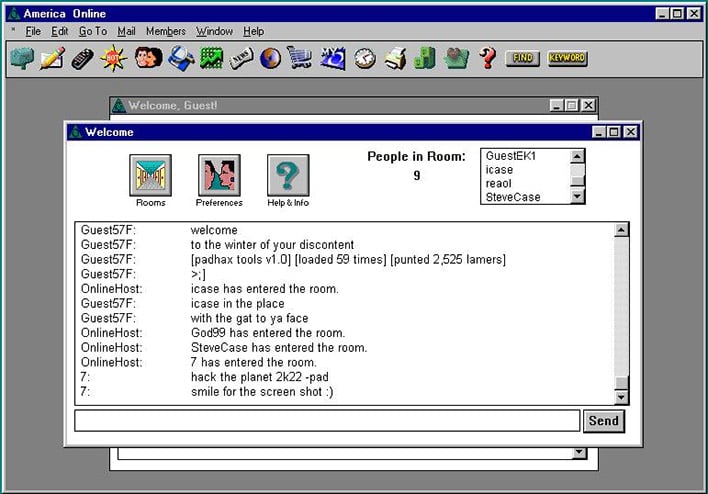 AOL 3.0 so far seems well-received. Many claim that the project hits all the correct nostalgic buttons. These kinds of messaging spaces provided a community for their users and this project achieves something very similar.

AOL Instant Messenger (AIM) officially shut down in December 2017. It was around for roughly two decades despite the rapid changes in messaging and the development of social media. Michael Albers, VP of Communications Product for Oath, remarked at the time, “If you were a 90’s kid, chances are there was a point in time when AOL Instant Messenger (AIM) was a huge part of your life. You likely remember the CD, your first screen name, your carefully curated away messages, and how you organized your buddy lists.”