Seriously, Bizarre Fisher-Price Chatter Toy Bluetooth Phone Is For Adults, Up For Pre-Order

Some of you may have woken up today and seen an ad for a working Fisher Price Chatter Telephone seemingly aimed at adults (and/or high-tech children), and thought it was April already. Well, it is not April Fool’s Day because you can indeed pre-order an actual working version of the nostalgic Chatter Telephone, complete with Bluetooth connectivity, as of today! Why? Uh, we'll try to get back to you on that one.

Fisher Price has brought to life what so many of us have desired since we were toddlers—the ability to actually hear who we called on our childhood Chatter Phone instead of playing make pretend. No more listening to an imaginary person as you ramble on about how you wish you made more on your allowance.

With a “super-advanced” rotary dial you can now call someone using the Bluetooth connection from your boring smartphone. Once your call connects you can switch over to the available speakerphone for hands free talking. Be enamored while you chat away with the Chatter Phone’s colors, wobbly eyes and intuitive rotary dial. And if you feel like you need to get mobile as you stroll down memory lane, the Chatter Phone even has wheels!

Fisher Price’s Chatter Phone, which first debuted in 1961, is a small piece of nostalgia that celebrates its 50th anniversary. It brings back memories from one’s childhood of talking on and on as though the person on the other end of the phone was actually interested in what we were saying (or even a real person, for that matter). Now, people visiting your home will be shocked (and perplexed) to find out that the Chatter Phone on your end table really makes and takes phone calls. 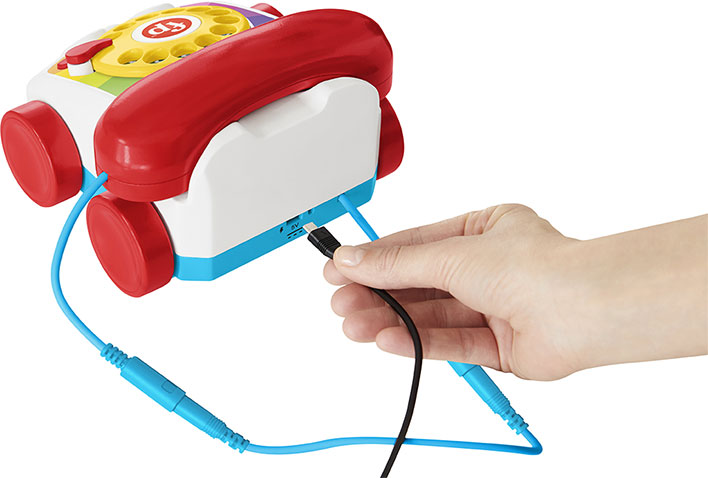 This is a lighthearted take on a childhood toy that elicits a bit of humor. While it is not intended to replace your modern-day cell phone, it is a piece of history brought to life. Much like in Toy Story 3 where the Sunnyside Daycare Chatter Phone who says he can “never be broken” (even though later on Lotso and his gang actually break him), this phone should take a temper tantrum or two.

You can pre-order your piece of nostalgia on Best Buy today for $60. And who knows, you may be able to call mom once it arrives and finally talk her into raising your allowance!