Do you happen to be a fan of the fastest video game franchise character out there? That's right, we're talking Sonic! More specifically about Sega itself and the launch of their latest mini-retro-console. The Sega Mega Drive 2 Mini.

The Mega Drive, known in the United States as the 16-bit Sega Genesis, was a popular console in the early 1990s which introduced the world to a number of game franchises. Most notably of these franchises would be Sonic the Hedgehog, which US advertising in that era was touted as a much "cooler" mascot than Mario. The console was also the first budget friendly 16-bit machine on the market, making it super attractive to newer developers at the time. For example, one of the first Madden NFL Football Games by Electronic Arts was developed for the Sega Genesis. If you want more info on retro gaming history we highly recommend the Netflix documentary, High Score.


Unfortunately for some gamers, the Sega Mega Drive Mini (JP), or Genesis Mini (US), the first iteration of a similar product launched to some not-so-great reviews. While the product did include a whopping 42 titles, far more than its competitor's counterparts individually, it was plagued with slowdown issues related to the high framerates necessary to run some of the classic titles for the console. Most reviewers did actually like the device overall, though, despite its problems. Hopefully the Sega Mega Drive 2 Mini will have resolved these issues. It is a second iteration, after all.

The overall feature list is relatively short, as it's basically still a Mega Drive, but better and powered with USB along with an HDMI output and game save states. However, the system is expected to include at least 50 titles, beating its direct predecessor by eight. Most interestingly though, the Mega Drive 2 Mini looks like it will allow people to buy a cosmetic, non-functional, attachable Sega CD. According to the trailer some of the games listed to be expected include Sonic CD, Shining Force CD, Virtua Racing, Thunder Force IV, and of course a bunch more. If you hadn't noticed, at least one of those titles was more of an arcade mainstay for some time in the early 1990s. Because of course, the Sega Mega Drive 2 Mini is actually going to include some arcade classics as well. 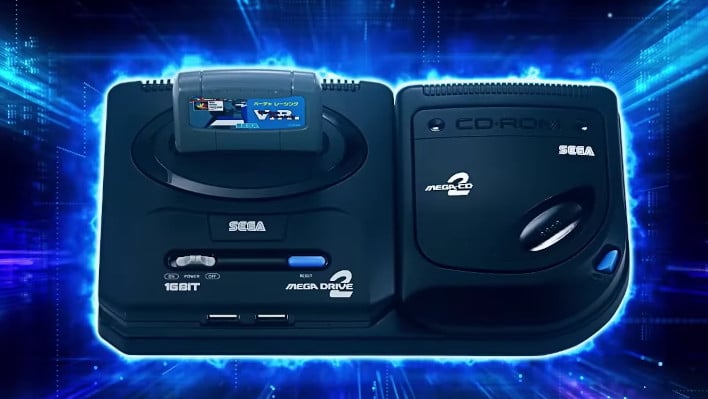 Retro gaming fans get your wallets ready, because according to the official Sega Japan web site the Sega Mega Drive 2 Mini is slated to release on October 27th, 2022 for 9,980 Yen, or about $76. It's possible the US release is a little bit later, but lately it seems like most of these releases for mini-consoles have been pretty well-planned for global releases, either same day or within a few weeks of each other.
Update (Editor's Note):
Regarding the global launch, in an interview with Famitsu, Sega's Yosuke Okunari essentially confirmed plans to also release the Sega Mega Drive 2 Mini outside of Japan, noting that the original Mega Drive Mini actually sold much better overseas. Via Google Translation:

"That's right. To be honest, the Mega Drive Mini sells many times more than Japan in North America and Europe. However, this time I dared to increase the distribution of Japan where the faces of the customers are visible. Of course, we are preparing for overseas expansion, but the sales volume is centered on Japan. Even so, I can't put out as many as last time ...," Okunari said.
It's not clear what kind of sales split Sega is aiming for, though Okunari states that the sales volume of the Mega Drive Mini was also limited.