A group of physicists at Massachusetts Institute of Technology (MIT) has released a new study that involves lasers and a cloud of lithium atoms going dark as part of the Pauli blocking theory. This is the first observation of Pauli blocking's effect as it relates to how atoms scatter light.

When one thinks of something becoming invisible, they may think back to the Cloak of Invisibility from Harry Potter. But what the team at MIT achieved is quite a bit different than what happened as Harry wrapped the cloak around himself to become undetectable so he could go unseen.

The Pauli exclusion principle, or Pauli blocking, is a fundamental property of atomic physics where an atom's electrons are positioned in energy shells. It is likened to concertgoers in an arena, where each electron can occupy a single chair and cannot move to another chair in a lower tier if all those chairs are being occupied.  Physicists at MIT have been able to observe this in a completely new way while observing the Pauli blocking effect in a cloud of lithium atoms.

The group at MIT saw that as they made a cloud of lithium atoms colder and more dense, the atoms scattered less light and grew dimmer. Because of this, they in turn believe that if they were to push the conditions cold enough, to temps of absolute zero, the cloud of atoms would become invisible. Essentially as the atoms are supercooled the Pauli effect kicks in and there is less room for the atoms to scatter light. 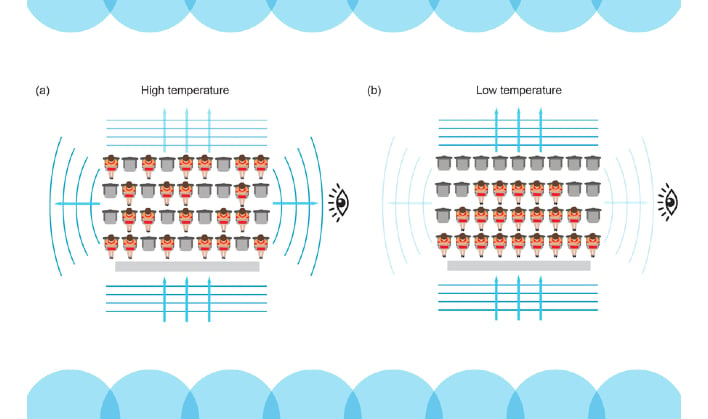 Amazingly enough, the Pauli blocking effect was predicted some 30 years ago, but this is the first ever observation of it in action. Wolfgang Ketterie, the John D. Arthur Professor of Physics at MIT explained, "Pauli blocking in general has been proven, and is absolutely essential for the stability of the world around us. What we've observed is one very special and simply form of Pauli blocking, which is that it prevents an atom from what all atoms would naturally do: scatter light. This is the first clear observation that this effect exists, and it shows a new phenomenon in physics."

Pauli blocking was first formulated by Austrian physicist Wolfgang Paul in 1925. He stated that all so-called fermion particles with the same quantum state as each other cannot exist in the same place. In a 1967 paper co-authored by Freeman Dyson, it was said that without the exclusion principle all atoms would collapse together while erupting in a very large release of energy. These outcomes not only help to produce the variation of the periodic table, but is also what prevents our feet from falling through the ground as we stand or take a step.

This newly observed information is also being looked at in terms of how it can be used in quantum computing. Some believe it could be used to develop light-suppressing materials to prevent information loss in quantum computers. These computers are currently burdened by quantum decoherence, or the loss of quantum information to a computer's surroundings.

As more is discovered in this area it will be fascinating to see what comes from it. The world of science, physics, and all that makes up what surrounds us will continue to evolve and bring new and exciting fronts to be explored.