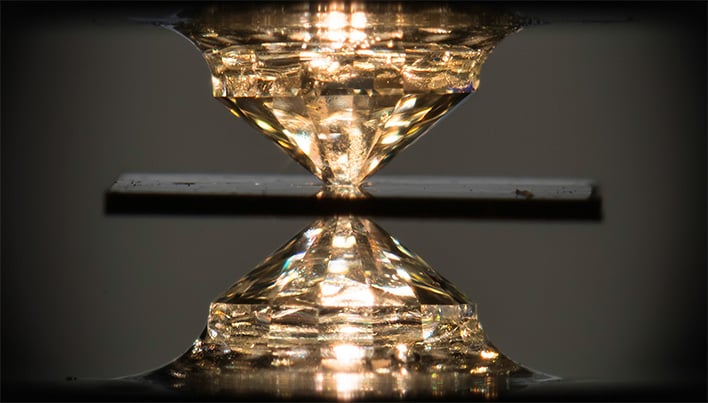 For many, many years, scientists and researchers have been trying to find a compound capable of conducting electricity at room temperature, without any flaws. And now at long last, a team of researchers have accomplished the feat, using a combination of hydrogen, carbon, and sulfur, along with expensive diamonds and an incredible amount of pressure.

Some might consider the definition of room temperature to be applied a little loosely here, as the accomplishment happened at 59F (15C). That is a bit on the cold side, but this is a remarkable achievement all the same. Consider that just five years ago, a different team of researchers worked out a superconductor at -94F, that required 1.5 million times the pressure of the atmosphere.
"One of the long-standing challenges in experimental physics is the observation of room-temperature superconductivity. Recently, high-temperature conventional superconductivity in hydrogen-rich materials has been reported in several systems under high pressure," the research teams notes in a paper published in the journal Nature.

This essentially represents a Holy Grail moment in physics, to an extent. Being able to conduct electricity between two points without any resistance has all kinds of nifty applications, but one of the roadblocks has always been the need for really cold temperatures. So demonstrating that it is possible at 59F is a big breakthrough. It is also only half of the solution.
There remains the problem of pressure. Before we can talk about implementing this into quantum computers, levitating trains (or maybe hoverboards), and other game-changing applications, researchers must next figure out how to achieve the same goal at far less pressure. In this case, the researchers squished the superconducting compound between a pair of diamonds at a pressure that is about 75 percent that of the Earth's core.
So in that regard, this is still not practical for real-world applications. But is a major step in that direction, one that began when scientists started looking at combining hydrogen with other elements to make a viable superconducting substance. And going back even further, the concept of superconductivity sparked the interest of researchers as far back as 1911. Let's hope the next big breakthrough comes sooner than later.
Thumbnail/Top Image Source: J. Adam Fenster / University of Rochester