Samsung is consolidating two of its software services, Samsung Pay and Samsung Pass, into a single Samsung Wallet digital platform. This will allow Galaxy device owners to securely and more easily manage their digital keys, boarding passes, identification cards, loyalty cards, and more in one mobile application. The idea is that it “holds everything your digital life needs” in a convenient place, without sacrificing security.
That latter bit is obviously a key concern when throwing all your digital eggs into a single basket. However, Samsung is promising “defense-grade security” via Samsung Knox, which is the company’s proprietary security and management framework that comes pre-installed on most Galaxy devices.
Samsung says it also takes advantage of an open Galaxy ecosystem by integrating with its Blockchain Wallet to monitor cryptocurrencies, and SmartThings to unlock doors. As it pertains to SmartThings, Samsung has partnered with nine home security companies so Galaxy device owners can add digital home keys to their Samsung Wallet.
It also supports digital car keys on select BMW, Genesis, and Hyundai vehicles. This initially includes BMW 1, 2, 3, 4, 5, 6, and 8 series vehicles, as well as 5-X7 and iX models launched after July 2020, and Hyundai Palisade, Genesis GV60, and G90 cars. Samsung says it expects to partner with more automakers as time goes on. 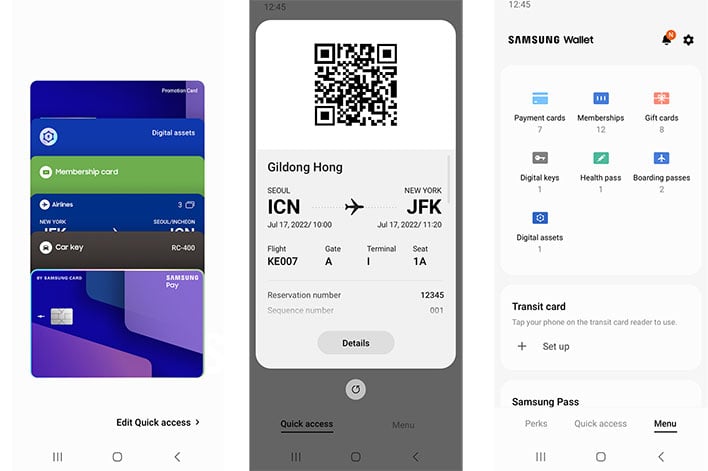 The full range of functionality will expand over time, too.
“Later this year, Samsung Wallet will also begin to support official IDs, such as mobile driver’s licenses and student IDs . Other important documentation, such as proof of COVID-19 vaccination status, can also be securely stored in Samsung Wallet,” Samsung says.
Samsung Wallet is available today to Galaxy users in the US, France, Germany, Italy, Spain, and the UK. Just open up the Samsung Pay or Samsung Pass app and follow the prompts to update and migrate to Samsung Wallet.