It's been almost a couple of years since I spent some hands-on time with Samsung's XCover Pro, a rugged Android handset without the usual bulk that you might expect from such a device. There was a lot to like about that phone, and many of those highlights appear to have found their way to Samsung's brand-spanking new Galaxy XCover 6 Pro.
To be clear, I haven't spent any hands-on time with the latest model. It's not actually out to retail yet (it will be soon), but at least on paper, it looks like another serviceable phone for folks who need a durable workhorse and who are entrenched in the Android ecosystem.
Samsung says the Galaxy XCover 6 Pro is designed to endure extreme working conditions. That translates to a durable MIL-STD-810H certified design. It also features an IP68 rating and Corning Gorilla Glass Victus+. The sum of all these parts and certifications is a promise that it can "withstand severe weather, drops, and other hazards that come with working in the field."
"While the Galaxy XCover6 Pro is among the most durable smartphones available, it’s also one of the least bulky. Its toughness is balanced with a stylish, sleek design more commonly found on consumer devices, giving it a slimmer and more ergonomic feel than traditional ruggedized smartphones," Samsung says.
Putting dimensions to that claim, the phone measures 168.8 x 79.9 x 9.9 millimeters (6.65 x 3.15 x 0.39 inches) and weighs 235 grams (8.29 ounces). To put those numbers into perspective, the Galaxy S22 Ultra measures 163.3 x 77.9 x 8.9 millimeters an weighs 229 grams. So the rugged Galaxy XCover 6 is ever-so-slightly thicker and weighs just a tad more. 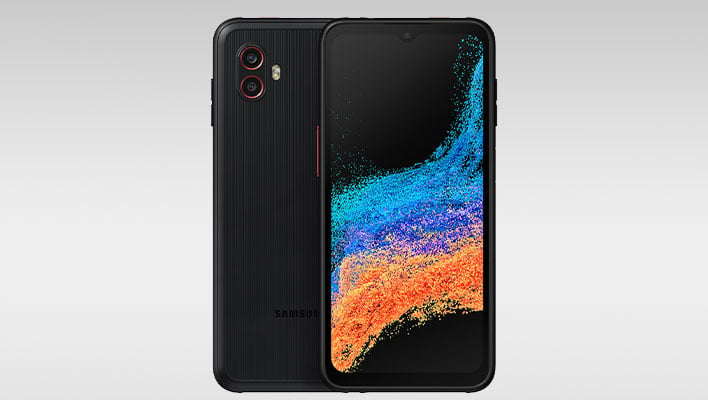 The display is a 6.6-inch FHD+ TFT screen with a 120Hz refresh rate. This is powered by an unspecified 6nm octa-core processor (Qualcomm Snapdragon 778G, most likely) and 6GB of RAM. Other features include 128GB of built-in storage (expandable via microSD supporting up to 1TB), a 13MP (f/2.2) front camera, 50MP (f/1.8) main + 8MP (f/2.2) ultra-wide rear cameras, Wi-Fi 6E, 5G, and a user-replaceable 4,050 mAh battery.
A replaceable battery has been a staple of the Galaxy XCover, and hearkens back to an earlier era in smartphone design (these days almost all premium smartphones have non-removable batteries). And once again, Samsung is also touting push-to-talk functionality so that workers can essentially use the phone as a walkie-talkie.
The Galaxy XCover 6 Pro will be available this month in select markets across Europa, Asia, and the Middle East, followed by an expanded release sometime later. Pricing has not yet been announced.