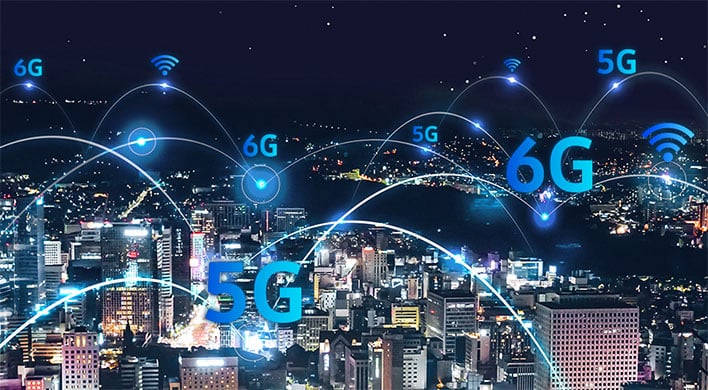 Technology is always expanding, moving towards the next big thing with cold indifference to leaving an inevitable trail of obsolescence in its wake. So even though 5G connectivity has barely had a chance to get its feet wet in the consumer sector, is it any surprise that companies are already looking ahead to 6G? Not faux 6G either—Samsung published a white paper laying out its vision for 6G connectivity with data speeds of 1,000 gigabits per second.
In all reality, it will still be at least a few years (maybe longer) before 5G connectivity becomes ubiquitous. It's already available in some major cities and more densely populated locations, but as it always goes with this sort of thing, cutting edge technology is slower to permeate the outskirts of major hubs, and especially rural areas.
Nevertheless, Samsung hints that 6G could arrive by 2028, if things develop at a pace that is consistent with past advancements in cellular technology.
"While 5G commercialization is still in its initial stage, it’s never too early to start preparing for 6G because it typically takes around 10 years from the start of research to commercialization of a new generation of communications technology," said Sunghyun Choi, Head of the Advanced Communications Research Center.

"We’ve already launched the research and development of 6G technologies by building upon the experience and ability we have accumulated from working on multiple generations of communications technology, including 5G. Going forward, we are committed to leading the standardization of 6G in collaboration with various stakeholders across industry, academia and government fields," Choi continued.
Samsung is right that it's never too early to look ahead at what's next. In this case, the company points out that the number of connected devices is expected to reach 500 billion by 2030, exceeding the global population (as it's expected to be in 2030) 59-fold.
Interestingly, one of the use-cases Samsung envisions for 6G connectivity is high-fidelity holograms...on mobile devices.
"In order to provide hologram display as a part of real-time services, extremely high data rate transmission, hundreds of times greater than current 5G system,will be essential. For example, 19.1 gigapixels requires 1 terabits per second. A hologram display over a mobile device (one micro meter pixel size on a 6.7-inch display, i.e., 11.1 gigapixels) form-factor requires at least 0.58Tbps. Moreover, support of a human-sized hologram requires a significantly large number of pixels (e.g., requiring several Tbps)," Samsung says.
Samsung points out that the peak data rate of 5G is 20 gigabits per second, concluding that "5G cannot possibly support such an extremely large volume of data as required for hologram media in real-time." Whether holographic displays will actually become a mainstream thing, though, obviously remains to be seen. 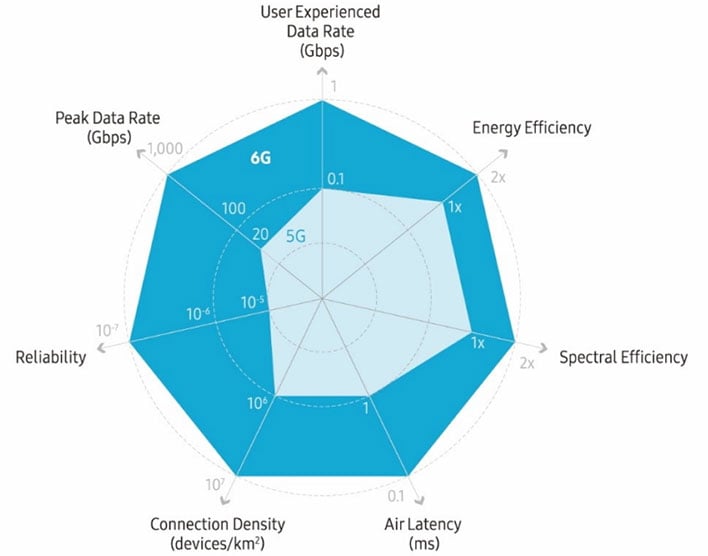 Raw speed and bandwidth are only pieces to a bigger puzzle. According to Samsung, its development of 6G technologies yields benefits in power efficiency, latency, and even overall reliability of connections. Part of all this will come from the use of the terahertz frequency band, as well as novel antenna technologies to enhance the coverage of high frequency band signals.

Summed up, Samsung envisions hyper-connected experiences for everyone. The company sees commercialization being feasible within the next decade, and mass adoption as early as 2030.
Check out the full white paper (PDF) for more on the subject.