It wasn't all that long ago that the majority of consumer CPUs came with regular old thermal paste under their heatspreaders. It's not just one vendor that did this, either; both AMD and Intel have shipped numerous microprocessors with thermal goop between the silicon die and the nickel plate that serves as an integrated heatspreader (IHS).

These days, pretty much everyone ships their CPUs with indium solder underneath the IHS. This special solder melts at a relatively low temperature, allowing it to be used on processors without damaging the silicon. It forms a secure bond between the IHS and the dice, giving reliably-good thermal transfer.


However, the thermal conductivity of indium solder isn't as good as pure metals like aluminum, copper, and silver. So-called liquid metal thermal interface material has superior conductivity as well. For this reason, absolute mad lads like @Madness7771 on Twitter are popping the tops on chips like the Ryzen 7 5800X3D to replace the solder with liquid metal TIM to drop temperatures. 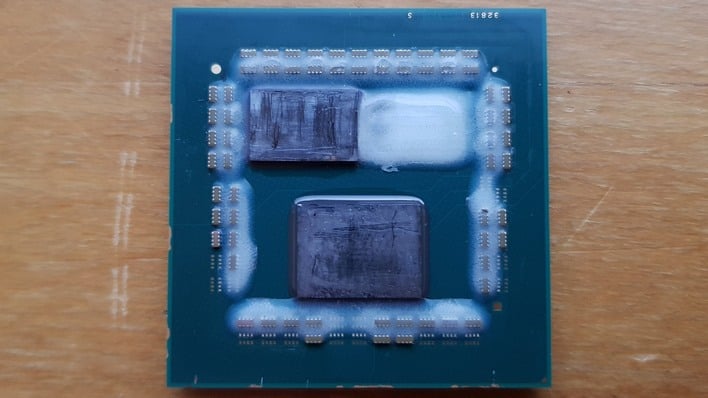 Indeed, this Madness! fellow did exactly that because his Ryzen 7 5800X3D was hitting 90°C under stress tests. We saw similar behavior from the same CPU in our test of the Falcon Northwest Tiki that came so-equipped, and your writer's own 3D V-cache-enabled CPU will skirt that number despite being under a gigantic Noctua cooler.


It's not quite clear why 5800X3D runs so hot, but it might be down to a poor mating between the IHS and CPU. We make that guess because Madness! managed to drop his load temperatures by some 10°C with his delid operation. That's not unusual at all for a delid, but it's a very nice improvement nonetheless.

As you can see in the monitoring results from Forza Horizon 5, he managed to achieve a stable 4.45 GHz where before, it was downclocking as far as 4300 MHz. This isn't a huge difference and given that Madness! was GPU-limited the entire benchmark run, it's not likely to affect his actual game performance. Still, in a more CPU-limited game, it absolutely could help stabilize minimum framerates.

Given the dangers and difficulty involved in delidding a soldered CPU, we obviously don't recommend this for the majority of readers, but those of you out there hard-core enough to pop the top on your brand-new Ryzen CPU for better thermals might consider doing so on the 5800X3D, as it does look like the assembly process leaves some room for improvement.