Researchers Find Dogs May Use An Internal Magnetic Compass To Navigate 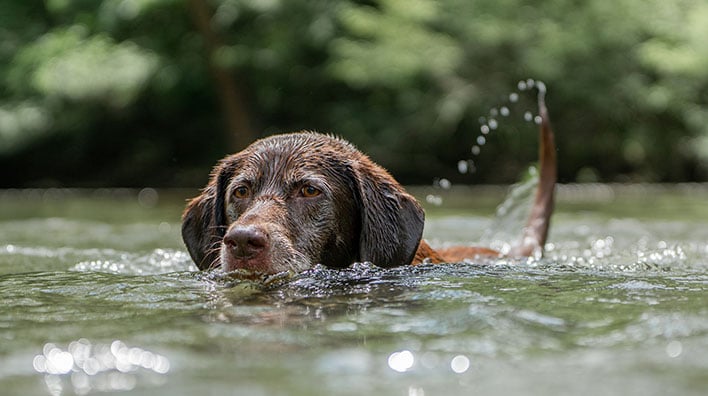 Taking my dog out for a whiz can be an experience—without fail, if I'm in a hurry, she is not, and must wander and circle several different areas in search of that precise spot sufficient enough to relieve herself on. And sometimes she'll be in mid-squat and decide, 'Nah, this ain't the place'. I never considered she might actually be tapping into the Earth's magnetic field, whether it's to find a spot to pee, or wander from one place to the next. But maybe she is, according to some interesting new research.
As outlined in a new report from the eLife Sciences initiative this is a real possibility. Maybe not the peeing part, but there is evidence to suggest canines have a sort of built-in magnetic compass, like a canine GPS, if you will. Combined with their excellent sense of smell, being able to use the Earth's magnetic field makes them particularly adept at navigating a variety of locales, including new places.
Catherine Lohmann, a biologist at the University of North Carolina, Chapel Hill, is intrigued by the finding. She studies "magentoreception" and navigation in turtles, and says the research into the navigational ability of dogs is not as extensive as it is in birds and animals that migrate. That is starting to change.
However, there is actually some research available. Back in 2013, ecologist Hyneck Burda showed that dogs have a tendency to orient themselves in a north-south direction when relieving themselves. Burda surmised that dogs do this to help determine locations relative to other spots, partially as an aid in marking territories.

Now one of Burda's graduate students, Kateřina Benediktová, has expanded on the research in a new study using cameras and GPS trackers mounted onto four dogs. The dogs were taken into a forest so their movements could be tracked. Interestingly, the dogs typically took one of two paths in returning to their owners—the original route, which they retraced presumably by scent and visual cues, and a new path that has been dubbed a scouting route.
The latter provided some intriguing data. Namely, dogs that took the scouting route would stop and run for about 20 meters in a north-south axis before starting to navigate back. At first glance, this seemed like a way of aligning themselves along a magnetic field.
Based on that information, they expanded the study to include 27 dogs, with hundreds of trips over the course of three years. This yielded 223 scouting runs. In 170 of those scouting trips, the dogs stopped before turning back and exhibited the same 20-meter run on a north-south axis. In most cases, this also resulted in a more direct route back to the owner.
More research is needed to know for sure if this is actually what is happening. And more research is planned. Specifically, they plan on running a similar test, but with magnets placed onto collars worn by the dogs to disrupt the local magnetic field.
Neat stuff, and something to keep in mind the next time your pup seems to be wandering aimlessly for no rhyme or reason. You can find the full report details here.