Razer released its first soundbar in October 2014, but with the focus in gaming having largely shifted to headphones since then, it was fair to wonder if it would ever release another one. Now seven and a half years later we have our answer. Razer today unveiled the Leviathan V2, it's second PC soundbar and the first of its kind to tout THX Spatial Audio support.
That's one of the perks of having acquired THX several years ago—Razer can be first to market with certain technologies, if it wishes. Spatial Audio uses software wizardry to create a virtual surround sound stage, negating the need to actually surround yourself with speakers. It essentially attempts to trick your brain into thinking you're hearing audio from behind you when wearing a pair of supported headphones or, this case, sitting in front of a soundbar.

No other PC soundbar supports THX Spatial Audio, and so that's a distinguishing feature of Razer's latest audio product. Whether or not it works as advertised, that's something we'll reserve judgement for until we've hand a chance to test it. 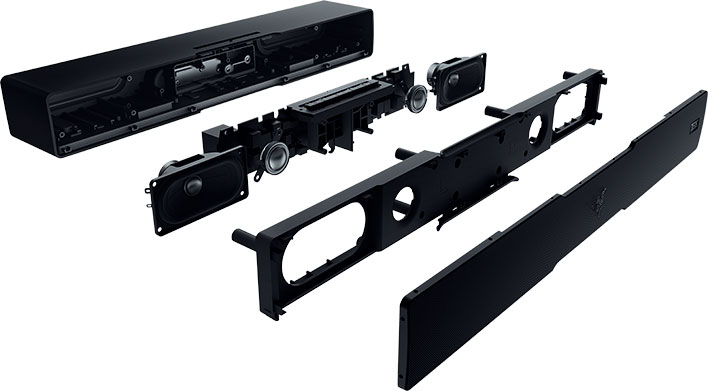 On paper, the Leviathan V2 looks promising. It's outfitted with a pair of full-range drivers with two tweeters,  two passive radiators, and ships with a down-firing subwoofer for added oomph. The original Leviathan didn't have any passive radiators. It also features 18 Chroma RGB lighting zones, because this is Razer after all.
A disappointing omission is the lack of a 3.5mm audio port. However, it supports Bluetooth 5.2 (60ms latency), so you can jam to music from your phone or tablet. For PC gaming, you'll probably want to connect it using the included USB cable. You'll also need to manage two other cables—the power cord and the subwoofer cable (it's not wireless). 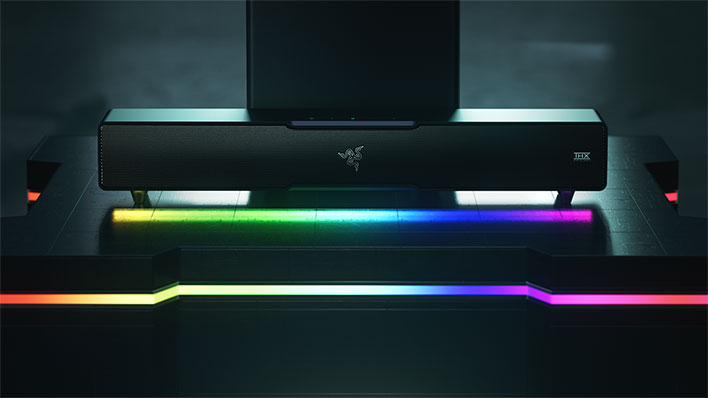 This is a compact subwoofer with detachable feet, the latter of which allows users to adjust the angle for the desired fit underneath a monitor.
It looks like an interesting product, if also a bit niche. PC gaming soundbars aren't super common, though they do exist, like the LG UltraGear GP9 we reviewed a few months ago. LG's soundbar comes with a built-in battery so it can also serve as a portable speaker, but it's more expensive and doesn't support THX Spatial Audio. It's likely Razer's Leviathan V2 hits harder too, courtesy of the subwoofer, but that's just a guess.
For anyone interested, the Leviathan V2 is available now for $249.99.