There is still another week to go before the Consumer Electronics Show (CES) kicks off, but some of the pending announcements are being tipped in leaks ahead of the event. One of them is MSI's collaboration with Ubisoft on a couple of themed laptops, those being the 15.6-inch Crosshair 15 and 17.3-inch Crosshair 17.
A leaked slide marketing image highlights a custom theme based on Tom Clancy's Rainbow Six Extraction. It looks pretty neat even if you're not in to the Rainbox Six series (especially if you like the color yellow), though obviously fans of the franchise will appreciate the custom graphics and accents the most.
Here's a look, courtesy of the folks at Videocardz... 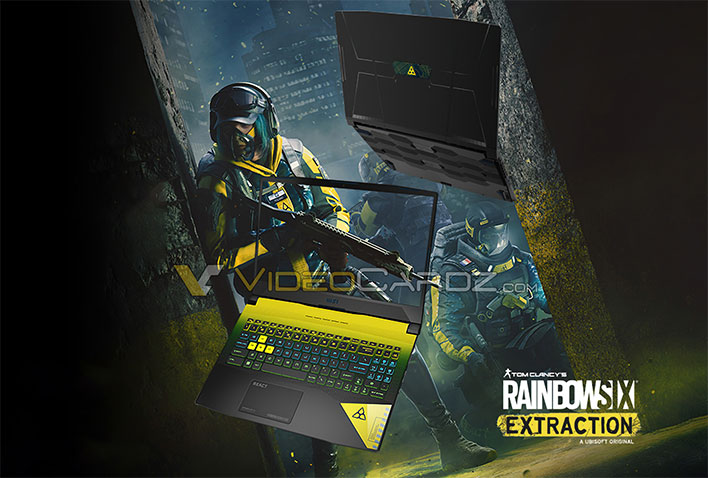 "The Crosshair GL series is a collaboration between MSI and Ubisoft. The series features a futuristic design with exclusive sci-fi elements inspired by the feeling and mood of gameplay, and the comes equipped with Intel Core i9 processors and Cooler Boost 5 Technology," MSI purportedly states.
Apparently the limited edition laptops will also come with an exclusive bundle pack consisting of Rainbow Six Extraction, a gaming mouse, and a mouse pad.

Beyond the theme and added goodies, these laptops will pack some impressive firepower, if the leak is accurate. It's said they will feature Intel's rumored mobile 12th Gen Core processors based on Alder Lake, and discrete GPU hardware up to a GeForce RTX 3070 Ti, which also hasn't been announced yet.

Interestingly, it's said the larger Crosshair 17 will wield an IPS display with a 1920x1080 resolution and 360Hz refresh rate, while the Crosshair 15 will feature a 2560x1440 with a 165Hz refresh rate. Seems like those two should be switched around, but perhaps MSI's research says otherwise.
Look for the themed Crosshair 17/15 laptops to be announced at CES.