Thanks to recent supply shortages, people have had a large struggle getting their hands on Raspberry Pi 4's. Even the Pi 3 models have gone up in price compared to years before. Not only that, Raspberry Pi CEO Eben Upton stated that it's unlikely we'll see a Raspberry Pi Model 5 come in 2023. It's not all bad news for fans of these small form factor devices, though. Thanks to the success of the Pi, other manufacturers have worked their way into the single-board computer space. These include Radxa, who recently revealed its ROCK 5A SBC, a follow up to its larger ROCK 5B pictured below.

Bearing a striking resemblance to the Raspberry Pi 4, the Radxa ROCK 5A SBC is powered by a Rockchip RK3588 and has a GPIO that might look pretty similar to those who are use to the Raspberry Pi. The processor includes a GPU which allows this little board to run up to 8K resolution video. To compare, the Pi 4 only manages 4K as of this writing. The processor in this device is surprisingly powerful for such a small form factor and definitely puts Radxa ahead of the curve right now.


The embedded ARM Mali-G610 MP4 3D GPU makes this device compatible with OpenGLES 1.1, 2.0, and 3.2, OpenCL up to 2.2, and even Vulkan 1.2, though we highly doubt gaming is a core focus of those who utilize this device. That 3D capability, however, can be used for handling and processing 3D input and scans, which can be useful for robotics and other applications. Below is a list of full hardware specifications for the device.
The Radxa ROCK 5A can support up to 16GB of LPDDR4x RAM. It, like many other boards of its type, uses MicroSD for its primary storage. Also, unlike many top-tier cell phones of today, it comes with a 3.5 mm audio jack. The only drawback on the device is that there is no Wi-Fi built-in. However, it does have an M.2 E Key socket, if you wish to add Wi-Fi that way. Full IO details are listed below. 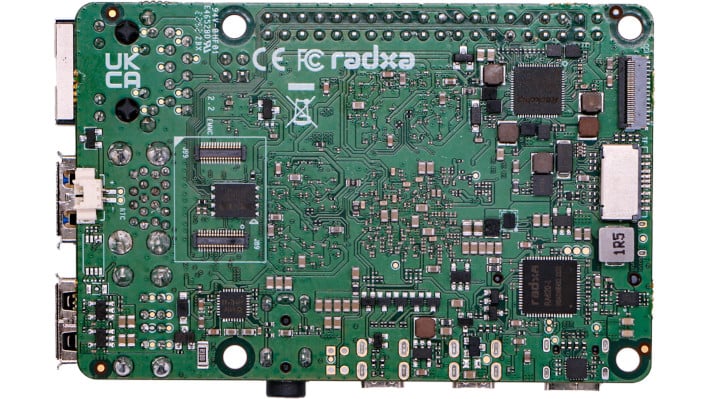 Image of Bottom of Radxa ROCK 5A

While it is not released yet, prospective buyers can score a $30 pre-order discount via China-based retailer ALLNet China with a $5 deposit. Or if you're impatient and want to use a similar, but larger board, you could pick up the Rock5 Model B, which runs the same processor. If you want more information on the ROCK 5A you can check out the Radxa forum where the device was announced.