Before you know it, 2022 will be drawing to a close, and that means a new wave of smartphones will be on the horizon, driven by a new Qualcomm silicon platform. Many of the next-gen flagship devices due to arrive next year will likely run on Qualcomm's latest mobile platform, the just-revealed Snapdragon 8 Gen 2. This chip is the predictably named follow-up to last year's Snapdragon 8 Gen 1, with the usual array of performance and efficiency enhancements. Qualcomm is also changing up the CPU core configuration this time around to maintain support for older apps while giving new ones some extra oomph. 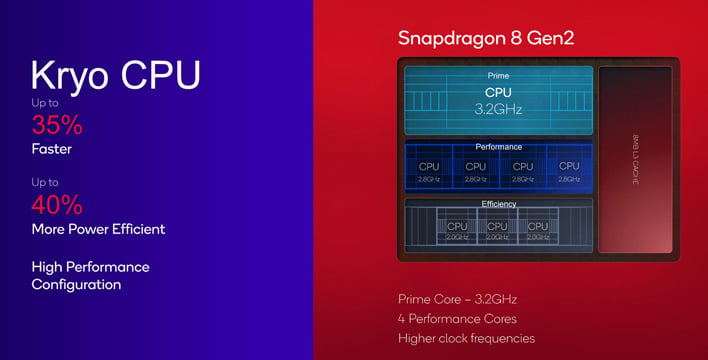 The Snapdragon 8 Gen 2 is still an octa-core chip, but the arrangement of the CPU islands has changed. While the Snapdragon 8 Gen 1 featured a prime core, three performance cores, and four efficiency cores (a pretty typical layout), the Gen 2 moves to a 1+2+2+3 setup. There's still one prime core on the menu, a Cortex X3 clocked as high as 3.2GHz for improved single-threaded performance. The low-power cores are the same Cortex-A510 we saw in last year's Snapdragon 8 Gen 1, but there are three instead of four now. 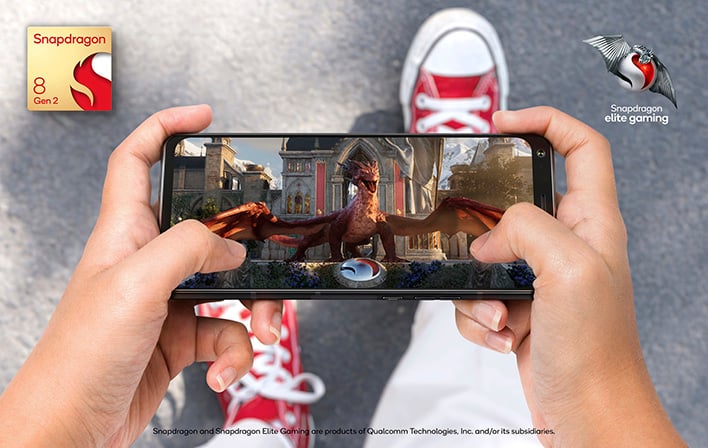 The four performance cores are split into pairs—two of them are Cortex-A710s and two are Cortex-A715s. All those cores are clocked at up to 2.8GHz, but there's a reason for the duality. The A710 is the most recent core that runs 32-bit native apps, and there are still some regions (like China) where 32-bit apps are necessary. Overall, Qualcomm claims a 40% boost to power efficiency with this setup, while maintaining optimal compatibility and boosting overall performance. 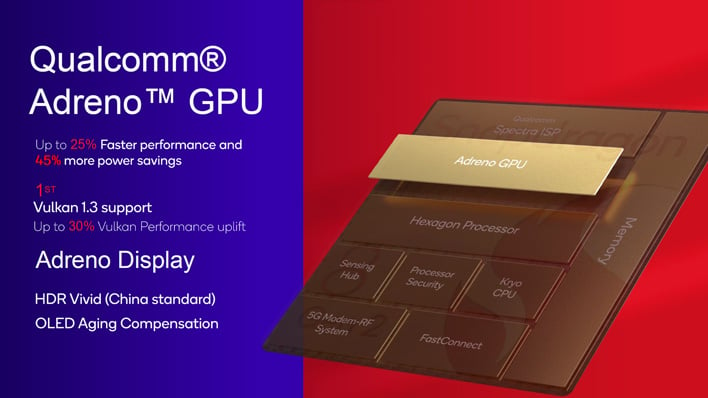 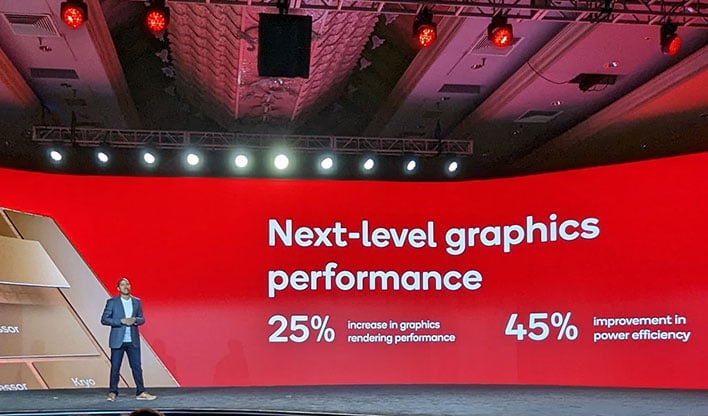 The Snapdragon 8 Gen 2 also brings an updated Adreno GPU to the party, promising a 25% performance boost compared to the Gen 1. Games that can benefit from the Vulkan 1.3 support should see as much as a 30% uplift. Qualcomm indicates that these performance gains also come with a power savings of up to 45%. 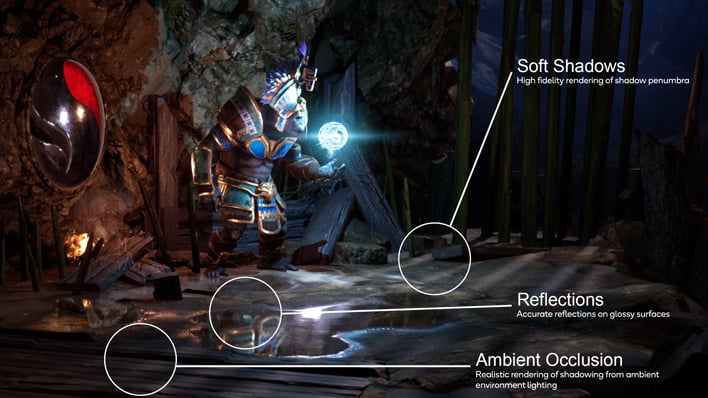 The new chip adds support for hardware ray tracing for more realistic in-game lighting and reflection effects, as well as the first mobile-optimized support for the Unreal Engine 5 Metahumans Framework.

Update, 11/16/22: The company provided a live demo of hardware-accelerated ray tracing in action and in-game as well on a Snapdragon 8 Gen 2 prototype phone...


Qualcomm is highlighting the new processor's AI enhancements as well. The generation-to-generation machine learning improvements we see in mobile chipsets are usually significant, but this only matters in specific use cases. As such, Qualcomm claims there is a 4.35x uplift in AI performance, but the 60% better power efficiency is arguably more important. Qualcomm says you can expect faster natural language processing, as well as new camera features when paired with the "Cognitive ISP." 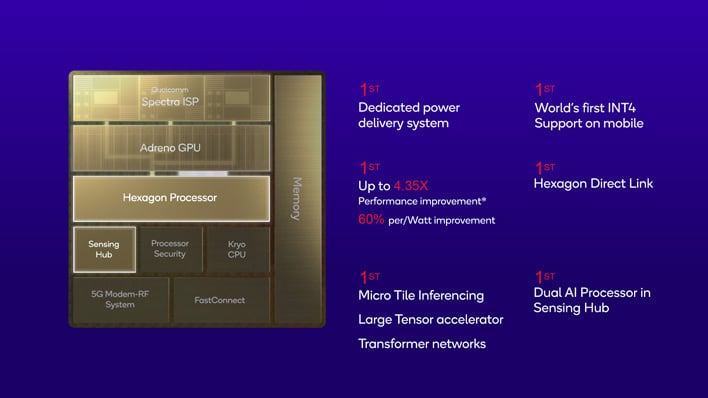 Snapdragon 8 Gen 2 uses a neural network to recognize faces, clothing, and other in-scene objects. Thus, it can automatically enhance your images, even at ultra-high resolutions. Case in point, Samsung's brand new 200MP ISOCELL HP3 image sensor is optimized for the Snapdragon 8 Gen 2 platform. This is also the first Snapdragon chip with support for the AV1 codec, much like Intel and NVIDIA have just offered in their recent Arc and GeForce desktop GPUs. 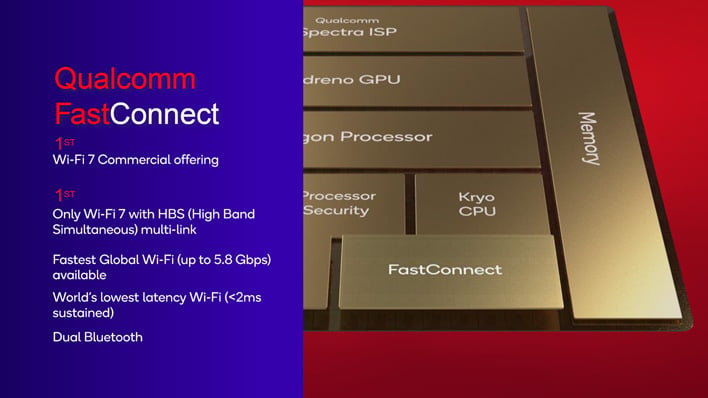 Of course, this wouldn't be a flagship Snapdragon chip without best-in-class connectivity. The new X70 modem can run two 5G SIMs concurrently, aided by what Qualcomm calls a "5G AI Processor." It supports up to 10 Gbps down and 3.5 Gbps up with 2x2 MIMO for millimeter wave and 4x4 MIMO for sub-6GHz. Qualcomm claims this is also the first mobile chip with Wi-Fi 7 support, though it's possible MediaTek may object to that characterization after its recent announcements. Regardless, as far as shipping devices go here in the US, Qualcomm looks to have the inside track. 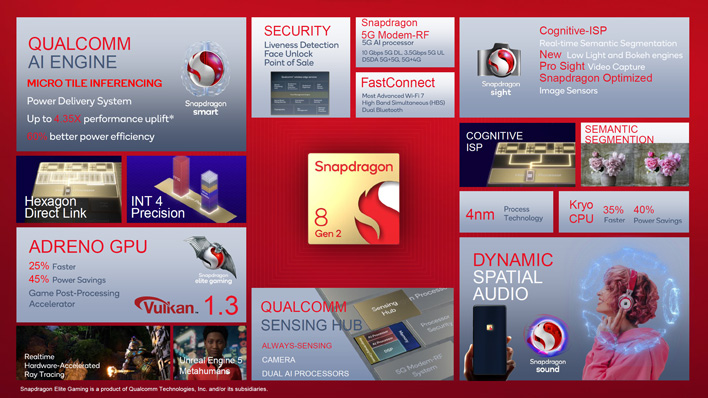 Qualcomm expects to see the Snapdragon 8 Gen 2 powering devices from OEMs like Asus ROG, OnePlus, Motorola, and more. Samsung is conspicuously missing from the list, but it is also expected to rely on the Snapdragon 8 Gen 2 in many regions. Qualcomm usually leaves it up to Samsung to make its own announcements. The Galaxy S23 isn't expected until early 2023, but the first phones with the 8 Gen 2 will begin appearing at the end of 2022.