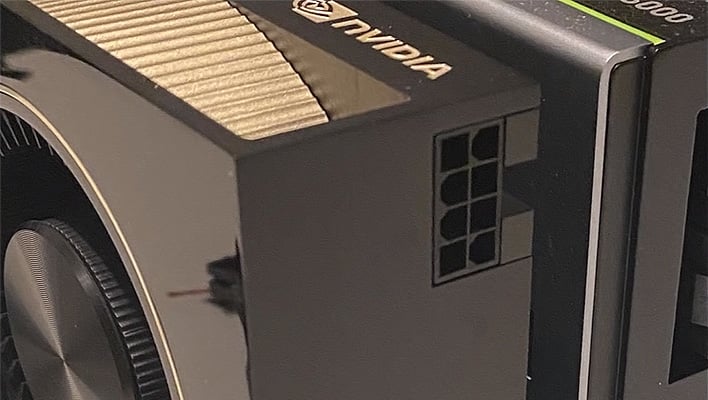 Having already launched the GeForce RTX 3080 and GeForce RTX 3090, the GeForce RTX 3070 is up next to bat (it releases to retail on October 15). Sometime after that, presumably, Ampere will shift over to NVIDIA's professional line of graphics cards. Hence why we are starting to see Quadro RTX A6000 leaks, including a photo that shows it having an 8-pin power connector.
As you may already know, NVIDIA opted for a miniaturized 12-pin PCIe connector on its trio of GeForce RTX 30 series cards. Here is how the power requirements break down for those cards...
Getting back to the Quadro RTX A6000, YouTube channel Moore's Law Is Dead posted a photo they obtained that purportedly shows an 8-pin connector on the upcoming graphics card. Also interesting is that the layout appears to be of the EPS-12V variety, and not a PCIe connector, as evidenced by the two square plugs on the top portion. 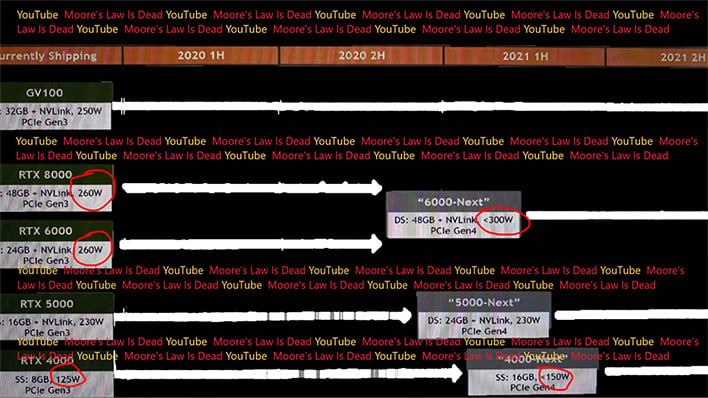 A separate source provided the channel with a roadmap that outlines the power draw. Assuming the information is accurate, NVIDA's upcoming Quadro cards based on Ampere will consume a bit more power than the Turing-based Quadro cards they are set to replace. Specifically, the Quadro RTX A6000 is shown as being a 300W card, versus 260W for the current-generation Quadro RTX 6000 and Quadro RTX 8000. Likewise, the Quadro RTX A6000 is shown as a 150W card, up from 125W on the card it replaces.

Based on previous leaks, the Quadro RTX A6000 is expected to feature a full GA102 GPU that flexes 10,752 CUDA cores, with boost clock of 1,860MHz. It will also arrive with 48GB of GDDR6 memory (16Gbps) on a 384-bit bus, and deliver 768.1Gbps of memory bandwidth, of those past leaks and rumors turn out to be accurate.
An interesting side note is gaming performance. The Quadro RTX A6000 is not built for gaming, but according to this latest leak, there have been some tests run by those who have their hands on early samples and it apparently beats the GeForce RTX 3080 in some games. This is despite the card using less energy and wielding GDDR6 memory instead of GDDR6X.
That's not terribly surprising, considering it has more CUDA cores, a faster boost clock, and a wider memory bus, which makes up for using slower memory.
NVIDIA will likely announced the Quadro RTX A6000 during its Graphics Technology Conference that runs from October 5-9.