Opal Camera Inc. has introduced a webcam that it says can rival that of a DSLR in terms of picture quality. However, there is one huge caveat for the camera out of the gate and it will cause many to hold off on buying one.

Webcams have become a must for many as they have transitioned from the traditional workplace to working from home. For many, the built-in webcams that come with laptops just don't cut it. The quality of the video is poor and the audio can be even worse. Due to those downsides, people have invested in standalone webcams and mics. Since the pandemic began, companies have been trying to take advantage of this by creating better webcams for those needing to connect to the office, or classroom, via video. Opal Camera Inc. is one of those companies and it says its webcam can even rival a DSLR in terms of video quality.

Opal Camera Inc. is based in San Francisco, California, and launched its company publicly on December 14, 2021. It began taking requests for its Opal C1 webcam the same day. The company stated through a press release, "Opal is making it easy to look and sound professional on video calls. This team is focused on building the best camera on the market today, and over the coming months will be continuously pushing the product to bring more delight to users."


As of right now, you can only get one of its new cameras by getting on a waitlist and then waiting for an Invite code. That waitlist already has over 16,000 people on it. Perhaps the reason for the long waitlist is because the company has said its biggest competitors are in fact DSLRs that cost much more.
That is quite a lofty statement to make about a webcam for sure. Especially when you toss in that the webcam costs $300 and for now is only able to work with Mac computers (Windows support is supposed to be delivered sometime in 2022). There are some very good webcams out there already that cost less, like the Elgato FaceCam, Logitech's BRIO and Dell's UltraSharp 4K webcam. Both of which offer 4K resolution as well. 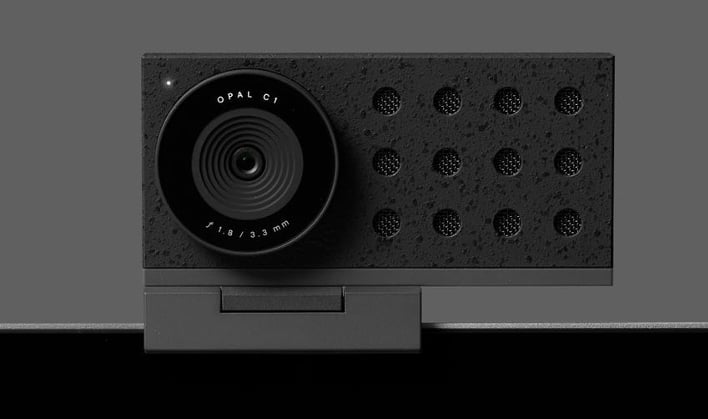 But we do not want to discount the Opal C1 just yet, because it does offer some nice features. The camera offers 4K imaging that the company states has an image sharper than anything else on the market. The main lens has an aperture of f1.8, which should deliver excellent images even in a dim environment. The camera can send and/or record video in both 1080 and 4K resolution at 60FPS, and is utilizing a 4K Sony sensor that is supposed to deliver the brightest of brights and the darkest of blacks.

Another of the companies selling points is with the audio it offers. The camera comes with what the company calls, MicMesh, an array of beamforming microphones that find and focus on the sound of your voice. It also offers noise cancellation that is said to cancel out every ding, drop and dog bark. This can be an alluring addition for those who may not want to shell out the extra money for a stand-alone mic, especially for those who travel a lot for work.

All good webcams these days come with some extras built-in through software. With the Opal C1 you can access the power of Opal Computer Vision with the Opal app. This app will allow you to fine-grain tune your image and give you access to Machine Learning powered features that will enable you to look your best. The Opal C1's software offers features such as FaceLock, Gestures and adding bokeh to your background (good for blurring out your messy room you were too lazy to clean). The software is in Beta for now and will be the method the company uses to add new features, as well as the ability to use the camera on Windows PCs that many will be waiting on before deciding to purchase. It is worth noting that the website for the Opal C1 indicates that while the software is free right now, it does appear it will become a subscription based product at $4 a month in the future. With options like Elgato's FaceCam that has free software and can be easily integrated with Elgato's other products, this may be a deal breaker for some.

While the claims of the Opal C1 sound amazing in that it rivals DSLRs in terms of quality, it would be hard for many to justify the $300 price tag right now. There are a couple of other options already on the market that can give you excellent video quality that are cheaper, do not have software that will cost an extra monthly fee, and will work with both Mac and PCs out of the box. Perhaps once the Opal C1 has been out on the market a bit longer and we can get a better view of how well it works, the price might be justified. Until then, you may want to look at the other options available.